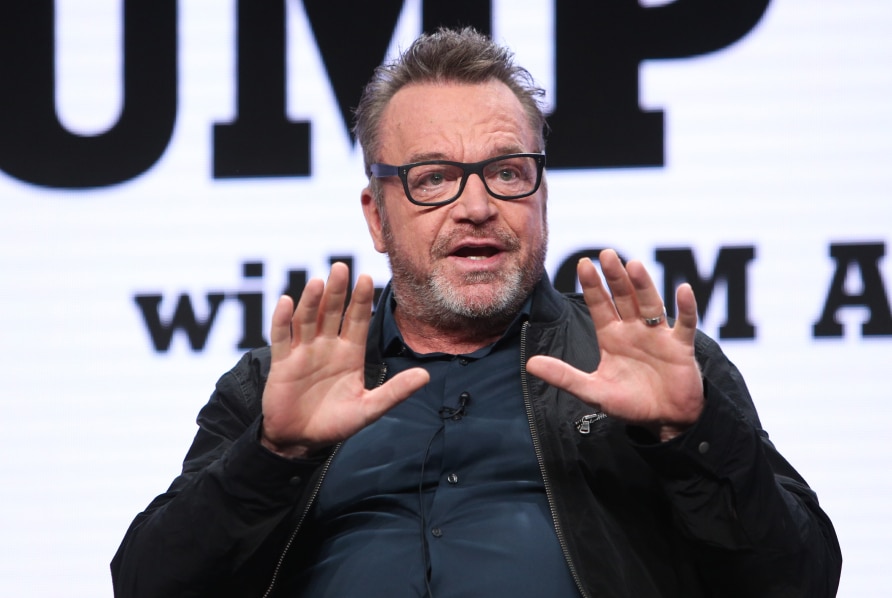 “I don’t give a sh*t about the 40%,” Tom Arnold said at TCA when asked if he thinks his new series The Hunt For The Trump Tapes will change the minds of President Donald Trump’s loyalists.

“I want to do this until he resigns. He’s a crazy person putting the country on the precipice of war…Things are going on right now that affect our world and that are scary,” Arnold ranted during a wild stream-of-consciousness Q&A for his program. “And, for some reason, I’m in a position to do something and it’s working and I will continue to do this until that guy resigns and the world is a little bit safer. And it is going to happen.”

Every day since Trump’s disastrous Helsinki summit with Russian ruler Vladimir Putin, “big things are breaking about that knucklehead, and he’s acting even crazier. He’s getting closer to saying ‘I am quitting on my terms’,” Arnold told TV critics who wanted to believe him.

“And this. And this 40% – f*ck em. Seriously,” he said, wrapping up the answer to Question No. 1 about eight minutes after it was asked.

“I would love Mark Burnett that sits at that [National] Prayer Breakfast. I’d like him to stand and up” and talk about the “lies and sexual harassment and incompetence” of Trump, the comic said.

“I’m going to keep hammering Burnett until he shows” those tapes,” Arnold announced, claiming Burnett has tape of Trump using “the n-word,” among other incidents that might actually embarrass any other President of the United States.

Burnett, Arnold said, “sits next to Donald Trump and gives him cover.”

Burnett says he’s a Christian, and lets that man do all this bullshit and let a sexual harasser on this show,” Arnold scoffed.

While TV critics fought to get in a word edgewise, Arnold tantalized them with word that producers had to pull Trump out of Apprentice tapings four times to say “Wow, bud, you can’t do that on this show!” He did not elaborate, as usual, in a presser packed with claims and almost entirely devoid of provable details.

“Anyway, it’s a comedy,” Arnold added of his Viceland show, getting a huge laugh and applause from TV critics, who lapped it all up.

Arnold claimed Burnett, who he said did a show with Putin before he did The Apprentice, is best known for that reality competition series, “where he created this dude” – and his “Jesus” miniseries.

“Jesus was a solid dude and he was not a fan of the rich guys. He was flipping tables and all this shit,” Arnold explained, for those in the hall not familiar with Jesus.

Burnett, Arnold scolded “could go on any of those Jesus channels and say to Trump’s many evangelical supporters, “People, calm down. Trump is not from Jesus.”

His quest to take down Trump is “personal,” Arnold said, since Trump became the leader of the birther movement. That’s because he, like Barack Obama, was raised without a father and was close to his grandfather. “I bet his grandpa had to defend him a lot,” Arnold said of Obama. “And I saw Donald Trump saying he wasn’t born in this country and I thought, ‘If his grandpa was alive he’d tell [Trump], ‘You had better shut the fuck up.’..

Arnold claimed to have contacted NBC and Burnett,” at the height of the birther controversy, to tell them they had to do something about their Apprentice star.

“Nobody did anything about it,” Arnold said.

He dodged questions about how ex-wife Roseanne Barr became a Trump supporter, and what she will think of his show. “I have no idea,” he said, reminding critics they have not been married for a quarter of a century.