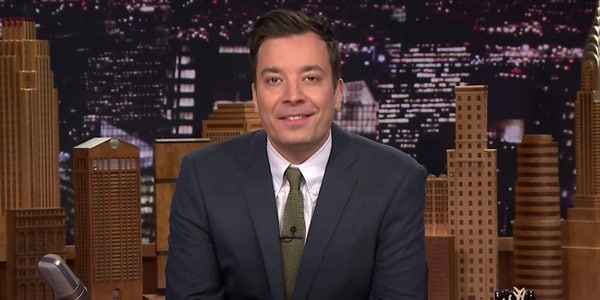 The Tonight Show Starring Jimmy Fallon brought back a live studio audience last night for the first time since the novel coronavirus pandemic shut down in-studio audiences in March 2020.

The NBC late-night show also returned to its longtime home of Studio 6B at 30 Rockefeller Center in New York City, after previously broadcasting from Studio 6A, the former home of the Today show’s fourth hour Hoda & Jenna when it brought in live audiences on Thursdays and Fridays prior to the pandemic, since July.

Running onstage from The Tonight Show‘s signature blue curtain, Fallon sported a full suit and tie (he’s been increasingly dressing up after progressing from casual, at-home shows to the 6A set-up) and greeted his crowd of socially-distanced guests.

Footage showed small groups of masked individuals in the audience, and Fallon and guest Andy Cohen later said the audience was just 58 people.

“I’ve never been so excited to do a show for 58 people in my entire life,” Fallon joked. “After last year, this is like performing at a sold-out Madison Square Garden.”

Much of the studio looked the same, with The Roots to Fallon’s left and announcer Steve Higgins to his right, but The Roots did seem to have gotten a somewhat new set-up allowing for members of the band to remain socially distanced during the show.

Fallon also joked that a family of raccoons has taken up residence in his desk since the show left the studio a year ago.

Cohen, who joined Fallon in studio, was seated on a couch spaced a little further than usual away from the host’s desk with a large coffee table between them. Fellow guest Tracee Ellis Ross, however, appeared via video, with Fallon speaking to a large video screen across from his desk.

“It’s still more than double the size of my normal audience,” Cohen, who hosts Bravo’s Watch What Happens Live, said of Fallon’s crowd. “This is certainly the most people I’ve seen in over a year. This is great.”

Fallon and many of his network late-night colleagues returned to their studios, after initially taping shows remotely from their homes for a few months, over the summer, but all have done so without live audiences (apart from a handful of masked crew members and colleagues in the studio). CBS’ Late Show With Stephen Colbert has been broadcasting from a replica of the host’s office at the Ed Sullivan Theater.

With Monday’s show, Fallon’s Tonight Show seems to be the first nightly network late-night show to bring back a live audience since the pandemic put an end to in-studio audiences in March 2020.

Fellow NBC 30 Rock show, Saturday Night Live, has had a small, masked audience of first responders since returning to its studio this fall. Similarly, other one-off events in recent months have featured audiences made up of masked first responders.