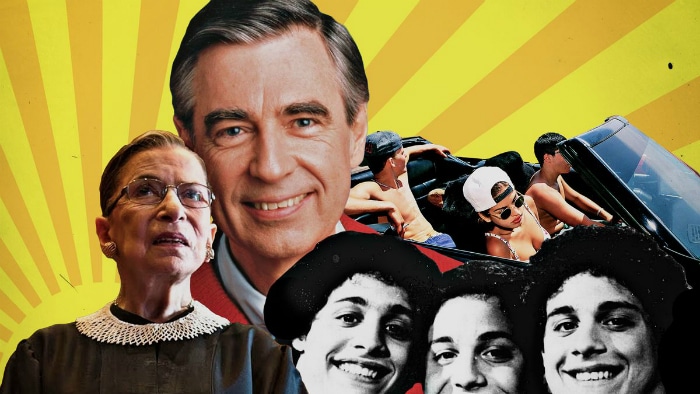 An 85-year-old Supreme Court justice. A pastor with a public television show. Identical triplets separated at birth. A songbird gone too soon. A pope. Pandas.

It isn’t a bad joke or the line at the post office that unites these figures. It’s documentary—six to be exact, all of which have been released to theaters this year, and all of which have earned at least $1.5 million at the box office. RBG, Won’t You Be My Neighbor?, Three Identical Strangers, Whitney, Pope Francis: A Man of His Word, and Pandas represent, if not a major moment, then at least a meaningful boomlet for theatrical documentary filmmaking, perhaps the culmination of almost 50 years of evolution and exposure for the form, stretching back to the Maysles brothers’ Salesman. It has been 40 years since Martin Scorsese’s The Last Waltz, about 30 years since Errol Morris’s The Thin Blue Line and Michael Moore’s Roger & Me, nearly 25 years since Steve James’s Hoop Dreams, 20 years since Spike Lee’s Four Little Girls, and 10 years since James Marsh’s Man on Wire. That half a century of meaningful work with increasing mass exposure has slowly redefined the form, turning what had been considered by some moviegoers a starchy, stiff form of storytelling into some of the most vital, sought-out films in the country. They are bid upon at festivals with a new vigor, reviewed with aplomb, and seen with more frequency than ever. Somewhere along the way, docs became, well, content.

“When I started, documentaries were like the spinach of filmmaking,” says Morgan Neville, the director of this summer’s biggest doc hit, the Mister Rogers film Won’t You Be My Neighbor? “Nobody cared about them. Nobody wanted to pay for them. They weren’t sexy. Now we’re in this amazing golden era of documentary and nonfiction storytelling that just keeps getting more interesting.”

Won’t You Be My Neighbor? is an extraordinary anomaly, earning $18 million and counting, passing prefab products like Disney’s animal-centric films Bears, Monkey Kingdom, and African Cats and approaching the likes of glossy pop-star-driven vehicles like Katy Perry: Part of Me and One Direction: This Is Us. Neville’s movie, which is distributed by Universal’s Focus Features, is already the 14th-highest-grossing doc of all time, with an outside chance at reaching the top 10. But unlike the polemical films that top the upper echelon—including Michael Moore’s Fahrenheit 9/11 ($119 million) and the recently pardoned Dinesh D’Souza’s 2016 Obama’s America ($33 million)—Neighbor is told in a straightforward, unfussy way, using standard head-on interviews, archival footage, and an utter lack of regard for austerity to render a movie that is by turns soft-bellied and soft-hearted. It has been bandied about as an act of defiance in the face of a noisy, angry presidential administration, a whoosh of radical kindness to remind viewers of a time before ALL-CAPS TWITTER TIRADES.

The late documentarian Albert Maysles—who made sympathetic figures out of door-to-door Bible salesmen, decaying shut-in aristocrats, and the IBM corporation—once said, “The film is sort of the beginning of a love affair between the filmmakers and the subjects. Some filmmakers make targets of the subjects they film; that’s not our way.” Neville’s film has that in common with RBG, Julie Cohen and Betsy West’s warm, meme-centric portrayal of Supreme Court Justice Ruth Bader Ginsburg. Their film is largely hagiography, an access-driven vision of a beloved, tireless activist jurist with a staggering record as a legal advocate for equal rights. It is dotted with nods to Her Honor’s viral late life, including the Notorious RBG moniker, Kate McKinnon’s caricature on Saturday Night Live, and her willed-from-dreams participation in the opera. Its tone is fizzy for biography, even peppy at times. RBG, which was financed by CNN Films and distributed by Magnolia Pictures, is not a breakthrough for the form—but its success has no precedent. (As a minor thought experiment, imagine a film of this kind about Bader Ginsburg’s longtime benchmate Stephen Breyer. Impossible.) The movie’s $13 million gross makes it the second-biggest single-subject, non-pop-star biodoc ever, coming in just behind Neighbor. It’s reaching audiences beyond the normal doc crowd.