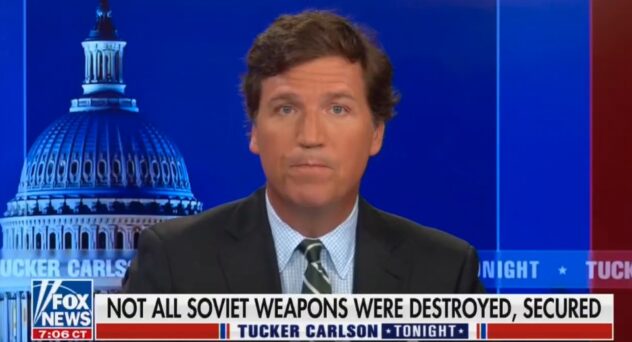 In an effort to argue that Ukraine is making biological weapons, Tucker Carlson cited an interview with a Pentagon official who – in that very interview – said the exact opposite of what the Fox News host told his audience the official had said.

For years, the Russian government has alleged the United States is funding labs in Ukraine to develop bioweapons, possibly to use against Russia. The U.S. denies the charge.

However, what was once a theory seen mostly on Russian state media and the fringes of the internet had a booster rocket attached to it by a State Department official named Victoria Nuland.

Nuland testified before the Senate Foreign Relations Committee on Tuesday and was asked, “Does Ukraine have chemical or biological weapons?”

Rather than answer the question, she responded,

Ukraine has uh, biological research facilities, which, in fact we are now quite concerned Russian troops, Russia forces may be seeking to uh, gain control of. So, we are working with the Ukrainians on how they can prevent any of those research materials from falling into the hands of uh, Russian forces should they approach.

Nuland was not pressed further.

Carlson and others have pointed to her worried and waffling response as evidence that something sinister must be afoot. On Thursday, he chided reporters for repeating “Pentagon talking points.”

Oddly, though, in the same segment, the host cited an interview with a Pentagon official named Robert Pope in order to give oxygen to the bioweapons theory.

Pope leads the Department of Defense’s Cooperative Threat Reduction Agency, which was created in 1991 in order to “secure and dismantle weapons of mass destruction and their associated infrastructure” housed stored in former Soviet republics, such as Ukraine. Back then, the Russians requested Western assistance in accomplishing this goal. Hence, the creation of the agency.