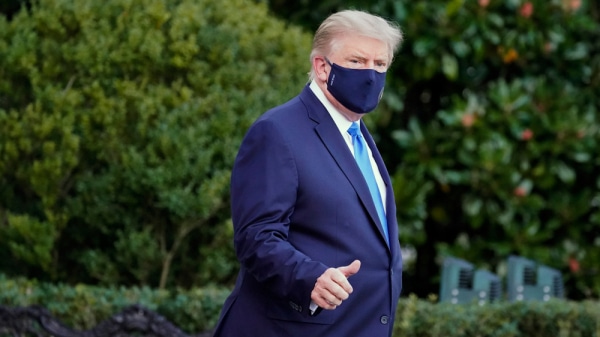 President Donald Trump was taken to Walter Reed National Military Medical Center on Friday evening, after feeling “fatigue” in the wake of his COVID-19 diagnosis.

A White House spokesperson said Trump would spend “the next few days” at the facility.

“Out of an abundance of caution, and at the recommendation of his physician and medical experts, the president will be working from the presidential offices at Walter Reed for the next few days,” White House press secretary Kayleigh McEnany said in a statement.

Trump was seen walking to Marine One, the military helicopter, shortly after 6 p.m. He waved to the media, wearing a dark colored mask. The helicopter took off from the South Lawn en route to the military medical facility in Bethesda, Md.

Earlier on Friday afternoon, Trump’s physician reported that he was “fatigued, but in good spirits.” The White House doctor also provided an extensive list of Trump’s treatments to combat the disease, including an experimental treatment, Regeneron’s polyclonal antibody cocktail.