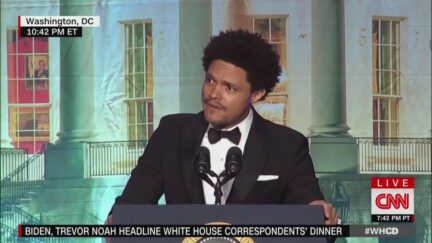 In a room where every media failure becomes magnified for comic fodder, the Quibian downfall of CNN+ figured to be a most inviting target at the White House Correspondents’ Dinner for emcee Trevor Noah. And sure enough, the Daily Show host went hard after the ill-fated streamer.

During a particularly singeing portion of his set on Saturday night at the Washington Hilton, Noah went after the failed streaming service, and the man under whose watch it was developed — ousted former CNN chief Jeff Zucker.

“Apparently Jeff got fired after he tried to keep his workplace relationship a secret,” Noah said — referring to Zucker’s relationship with former CNN executive Allison Gollust. “Which is weird because if he didn’t want anybody to know about it, he could have just made a show about it on CNN plus.”

The barb was met with nervous laughter, which Noah seized on.

The Comedy Central host went on to rip the network over the reported $300 million it sank into the failed venture.

“I think Stanley Tucci was playing you guys,” Noah said, invoking the host of CNN’s Searching for Italy. “I think that dude knew exactly where Italy was. And he was just going to keep searching as long as you were paying.”

And Noah did not let the moment pass without taking a shot at former CNN anchor Chris Cuomo.

“Three hundred million dollars!” He said. “Do you understand how much money that is? I mean, I do get it. Streaming, they say, is the future. You know, as the old saying goes: you gotta to spend money to make sure Chris Cuomo doesn’t get in a wrongful termination lawsuit.”