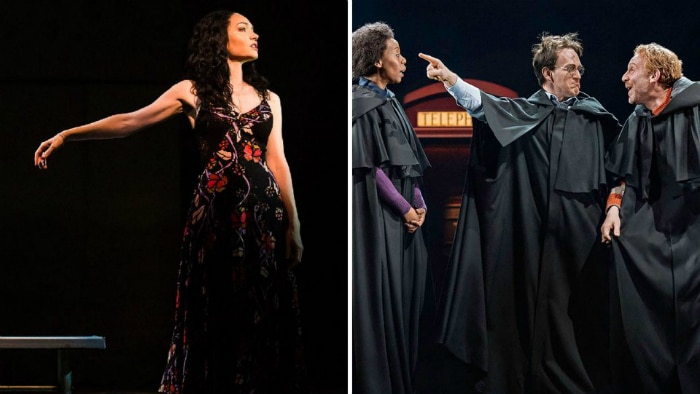 The Hollywood Reporter’s chief theater critic, David Rooney, shares his choices, while awards analyst Scott Feinberg names his predictions to win in the top categories ahead of the June 10 ceremony.

It’s been a thin season for new work on Broadway but a robust one for revivals. That means there’s little competition for the frontrunners in the best play and musical categories, with most of the suspense centered on the remounts.

The two-part continuation of J.K. Rowling’s beloved wizardry saga, Harry Potter and the Cursed Child, and composer David Yazbek’s intoxicating desert kiss, The Band’s Visit, are the new shows to beat. Distinguished play revivals battling it out include Angels in America, The Iceman Cometh and Three Tall Women, while two classic musicals, Carousel and My Fair Lady, go up against an enchanting underdog in Once on This Island.

Among star performers vying for Tony honors this year, British stage and screen royalty Glenda Jackson appears to be a sure thing to take home lead actress honors for the first time with her fifth nomination, for Three Tall Women; while Andrew Garfield has a strong shot at lead actor for his work in Angels in America.

There’s a chance those same productions might double up in the featured acting races, too. After earning a Tony last season for A Doll’s House, Part 2, Laurie Metcalf could score her second consecutive win, this time for Three Tall Women. And two-time previous winner Nathan Lane is well-positioned to pick up a third Tony for Angels.

The 72nd annual Tony Awards will be presented June 10 at 8 p.m., airing live on CBS (tape-delayed on the West Coast) from New York’s Radio City Music Hall. Taking on co-hosting duties are Sara Bareilles and Josh Groban, previous Tony nominees, respectively, for best original score for Waitress and for lead actor in a musical for Natasha, Pierre & the Great Comet of 1812. The awards will cap off a record-breaking 2017-18 season on Broadway, with grosses nudging $1.7 billion and admissions at 13.8 million.

With one week to go before the ceremony, The Hollywood Reporter‘s chief theater critic, David Rooney, shares his picks for the most deserving nominees, while awards analyst Scott Feinberg reads the tea leaves to predict who will triumph in the top categories — more often than not this year, they’re in agreement.

SHOULD WIN: The Band’s Visit
Mean Girls and SpongeBob SquarePants lead the field here with 12 nominations apiece. But as delightful as those shows are, the deserving favorite, with 11 noms, is The Band’s Visit. (The fourth nominee, Frozen, can “Let It Go” — this is not Disney’s year, though the show is the highest-grossing of the musical contenders and would appear to need no awards help at the box office.) Unlike its rivals, which are based on popular film and TV properties, The Band’s Visit was adapted with subtlety, impeccable craftsmanship and a mesmerizing Middle Eastern-flavored score from a little-seen 2007 Israeli film, making it seem closer to an original work. This poignant snapshot of brief but meaningful cross-cultural connections stands apart from the pack, its delicacy representing an almost radical statement on risk-averse Broadway.

WILL WIN: The Band’s Visit
From this field of four screen adaptations, two scored more noms and two have proven more commercially robust than The Band’s Visit, but recent history is on its side. Indeed, in each of the last three years, this prize has gone to a show — Fun Home, Hamilton and Dear Evan Hansen — that first earned its stripes off-Broadway, and then vanquished bigger-budgeted and splashier fare after transferring. These days, Tony voters seem less enamored with traditional musicals, and less concerned with how a show will play on the road than with giving a boost to a worthy contender that will benefit from it in the tough marketplace of the Great White Way (the best musical prize is the only one thought to have a significant impact at the box office). And while not everyone finds The Band’s Visit as satisfying as other recent best musical victors, it did win this prize at the Drama League Awards, and it’s hard to imagine any of its competitors in the winner’s circle.

SHOULD WIN: Harry Potter and the Cursed Child
All five nominees have their merits, but the Tony for original play is as much about the production as the text. On those terms, nothing comes close to the thrilling theatricality, incomparable stagecraft, the expansive narrative sweep and unexpected emotional charge of playwright Jack Thorne’s eventful new chapter in the Potter saga, conceived with J.K. Rowling and director John Tiffany. It takes bold imagination and unerring command to present a story and characters universally known through their book or film incarnations and make them seem uniquely suited to the stage. The gifted creative team achieves that and more here over two parts spanning five-and-a-half suspenseful hours.

WILL WIN: Harry Potter and the Cursed Child
This award tends to go to intimate, dialogue-centric productions (like recent winners All the Way, The Humans and Oslo), but when offered an engaging and totally outside-the-box alternative, like this extension of the Harry Potterstory, voters aren’t afraid to jump at it (see two other recent winners that came to New York via London, War Horse and The Curious Incident of the Dog in the Night-Time). A two-part experience that cost $68 million to mount, making it the most expensive nonmusical production in Broadway history, it has the added advantage of being the only nominee in this category still running — something that it might well continue to do for many years. It already won the corresponding Drama League Award.