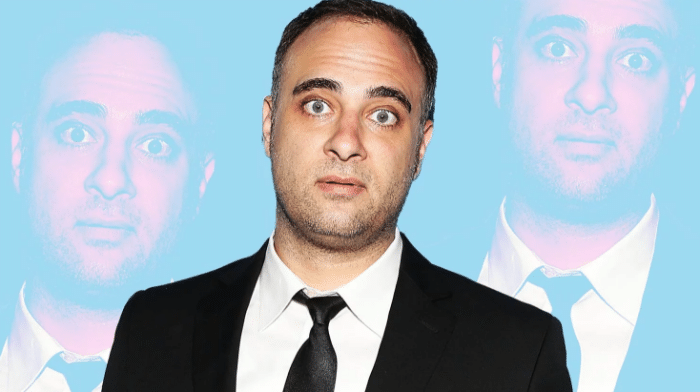 Kurt Metzger, the controversial comedian who fell from grace in 2016 after a series of inflammatory online comments regarding rape victims, has a new gig: writing for Sacha Baron Cohen’s controversial new TV show Who Is America?.

The show’s IMDB page lists Metzger, along with seven other men, as series writers; each are only credited for one episode.

Metzger previously made a name for himself writing for Amy Schumer’s breakthrough show Inside Amy Schumer. His brand of comedy is notoriously abrasive, but after several women came forward accusing fellow comedian Aaron Glaser of rape and sexual assault, Metzger took things to a whole new level.

Allegations against Glaser first came to light in 2016 after a woman posted in a private Facebook group for female comedians, warning others about her experience with Glaser. “Posting this on behalf of a woman in the community, who would like to remain anonymous, but wants to warn other women and let other women who may have been raped by this man know that they’re not alone,” the post read. According to the post, multiple women approached the Upright Citizens Brigade comedy theater with their allegations against Glaser, who hosted a monthly stand-up showcase there; while no police report was filed, Glaser was subsequently banned “permanently” from the theater.

That didn’t sit well with Metzger, who took to social media to share his outspoken support of Glaser. In a snarky Facebook post, he mocked Upright Citizens Brigade’s handling of the rape allegations, thoroughly lambasting the comedy venue and Glaser’s victims. Metzger referred to them and other Glaser decriers as “an unthinking herd of mewling progressive cattle.”

He took to Twitter to share similar sentiments, tweeting scorchingly-hot takes like, “Rape is hard to prove. That’s why u don’t tell victims to dick around on twitter before calling the cops. That’s controversial?? My bad!!”

He later added, “Wouldn’t blame a victim for trying to destroy an attacker’s rep. But I do blame someone who doesn’t even know the victim’s name doing it.”

Rape is hard to prove. That's why u don't tell victims to dick around on twitter before calling the cops. That's controversial?? My bad!!

During the first part of this saga, Schumer stayed conspicuously quiet, instead electing to block Twitter users critiquing her or Metzger. She later broke her silence, tweeting, “I am so saddened and disappointed in Kurt Metzger. He is my friend and a great writer and I couldn’t be more against his recent actions.”

Kurt does not work for me. He is not a writer on my show. Please stop asking me about it. His words are not mine.

Schumer would later offer a half-hearted defense of Metzger to the likes of Charlie Rose and Lena Dunham. “He baits people, he’s the problem, no question,” she said in an interview with Rose, “but the focus is on him rather that what the real, main problem is.” To Dunham, she acknowledged that although Metzger was her “friend,” this particular situation “was just so bad.” However, she was quick to question Metzger’s critics. “Why are these women treating him like he raped someone?” she said to Dunham. “He’s not Bill Cosby; Kurt has never raped.”