Arnold Schwarzenegger’s Terminator famously declared to the world that he would be back — but it’s Linda Hamilton’s Sarah Connor who’s making a badass return.

Paramount Pictures and Skydance Productions just dropped the first official photo from Terminator 6, sending franchise fans across the globe into fits of fist-pumping glee. Sarah Connor is back, gang, and we’re not going to pretend we aren’t over-the-moon excited about it.

This is the first official look at Linda Hamilton returning as Sarah Connor, and she is looking like a true badass. She reteams with Arnie and producer James Cameron, who directed the first two movies in the franchise and created the original characters. Deadpool director Tim Miller is behind the lens for what is sure to be one of the best Terminator sequels in year. Perhaps since Judgment Day. But let’s not push it.

Linda Hamilton’s Sarah Connor is joined by two franchise newcomers in the photo. Standing to the right is Natalia Reyes. And fresh from her role in Blade Runner 2049, we have Mackenzie Davis standing from and center. We don’t know too much about their roles in this apocalyptic tale of robots and survivors. We know Reyes is playing a character names Dani Ramos. Davis’ character is being held under a veil of secrecy for now, which has led some to believe that she is somehow related to Sarah Connor.

This isn’t the first time fans have seen Linda Hamilton return as Sarah Connor in recent months. The sequel started shooting in early summer, and even before the first bit of film rolled, images were leaking from set showing that Sarah was not in bad shape. She looks like she’s continued training for the impending apocalypse since we last left her in Judgment Day. 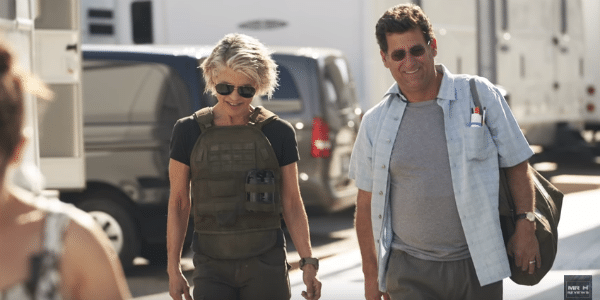 It’s clear that big changes are coming to the Terminator franchise — and not just in the three fierce females leading the charge. According to Schwarzenegger, who returns for Terminator 6 as an aged-up version of the title cyborg, director Tim Miller and producer James Cameron crafted something entirely fresh with the upcoming film, centering its story around a “few very basic characters” that can grab the proverbial baton from Schwarzenegger and Hamilton and carry the franchise into a new era. Considering how poorly the most recent Terminator films fared (specifically the critically hated Terminator: Genisys) that kind of a shake-up isn’t just exciting, it’s also necessary to keep the franchise afloat.

10 Deleted Movie Scenes That Would Have Fixed Plot Holes

Hayden Panettiere ‘Hasn’t Had Much Time’ With Her Daughter Kaya