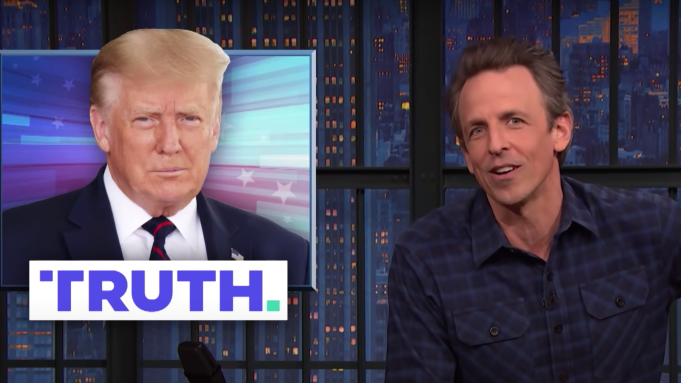 Donald Trump’s new social media app, Truth, might’ve topped the charts on the Apple App Store, but the launch was anything but seamless. Many users trying to sign up for the new social media platform either got an error message or were forced to go on a waitlist. Seth Meyers blasted Trump’s app launch as a “clusterfuck,” but he noted that every potential user should’ve suspected as much considering Trump is involved.

“By the time you find yourself signing up for a Donald Trump social media site, something already went wrong,” Meyers joked on “Late Night” this week. “But I’m guessing they’ll try again. If you were first in line to sign up for Truth Social, you’ve probably got some free time on your hands.”

Meyers mocked Truth Social users by saying, “‘Well I’m just sittin’ here, waiting for JFK Jr. to reappear at the Meadowlands with Elvis and the Loch Ness monster to prove the election was stolen. I guess I’ll try logging in again!’”

Referring to the Truth Social error message, Meyers added, “’Something went wrong,’ like even they don’t know what the problem is. Usually you get an error code or something but Trump’s site just gives you a shrug emoji that says, ‘What were you expecting, this thing is a clusterfuck.’”