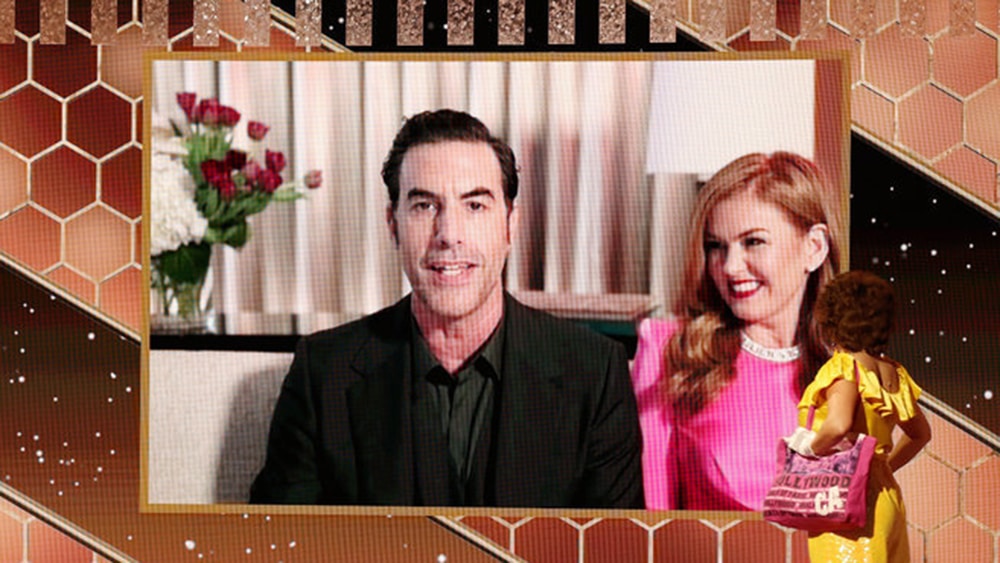 Wawaweewa! Sacha Baron Cohen took home two Golden Globes on Sunday night, one for best actor in a musical or comedy and another for best comedy or musical. He accepted both awards on behalf of “Borat Subsequent Moviefilm.”

During his first acceptance speech of the night, Baron Cohen called out the “all-white” Hollywood Foreign Press Association, which is the voting body behind the annual awards show, and thanked Rudy Giuliani, the reluctant star of the “Borat” sequel.

“Thank you to the all-white Hollywood Foreign Press. I’ve gotta say this movie couldn’t have been possible without my co-star, a fresh, new talent who came from nowhere and turned out to be a comedy genius,” Baron Cohen said. “I’m talking, of course, about Rudy Giuliani. I mean, who can get more laughs out of one unzipping? Incredible. Our movie was just the beginning for him, Rudy went on to star in a string of comedy films. Hits like ‘Four Seasons Landscaping,’ ‘Hair Dye Another Day’ and the courtroom drama ‘A Very Public Fart.’”

“They did that because we all believed so deeply in releasing this movie before the election to show the danger of lies, hates, conspiracies and the power of truth, empathy and democracy.”

In his subsequent speech for his best actor win, Baron Cohen poked fun at Donald Trump’s refusal to accept the presidential election results.

“Hold on, Donald Trump is contesting the result,” Baron Cohen said after his name was called for best actor in a comedy. “He’s claiming that a lot of dead people voted, which is a very rude thing to say about the HFPA.”

Baron Cohen also thanked his bodyguard, who he said stopped him from “getting shot twice.” “You know who you are,” he said, “and you know I’m not allowed to say your name.”

In the category of actor in a musical or comedy, Baron Cohen beat out James Corden (“The Prom”), Lin-Manuel Miranda (“Hamilton”), Dev Patel (“The Personal History of David Copperfield”) and Andy Samberg (“Palm Springs”).

Baron Cohen was nominated for three Golden Globe in total, tying the record set by Jamie Foxx and Helen Mirren for the most nods by a performer in a single year. Along with his celebrated return in the “Borat” sequel, he was also recognized for portraying Abbie Hoffman in “The Trial of the Chicago 7.”

His “Borat Subsequent Moviefilm” co-star Maria Bakalova received a nomination for best actress in a musical or comedy. Both Baron Cohen and Bakalova’s high-wire performances as Borat and his daughter, Tutar Sagdiyev, required them to stay in character with unsuspecting everyday people, a daring feat that earned the actors near unanimous praise among critics and audiences.