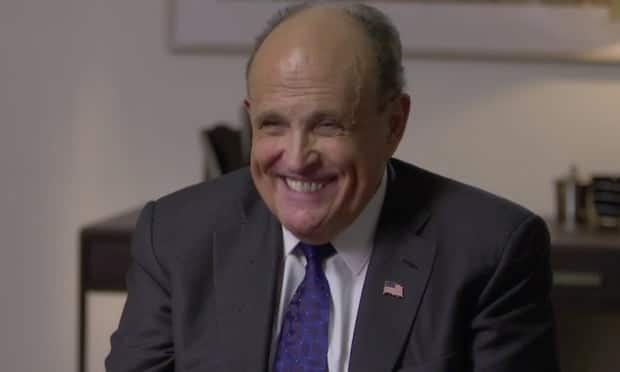 The reputation of Rudy Giuliani could be set for a further blow with the release of highly embarrassing footage in Sacha Baron Cohen’s follow-up to Borat.

In the film, released on Friday, the former New York mayor and current personal attorney to Donald Trump is seen reaching into his trousers and apparently touching his genitals while reclining on a bed in the presence of the actor playing Borat’s daughter, who is posing as a TV journalist.

Following an obsequious interview for a fake conservative news programme, the pair retreat at her suggestion for a drink to the bedroom of a hotel suite, which is rigged with concealed cameras.

After she removes his microphone, Giuliani, 76, can be seen lying back on the bed, fiddling with his untucked shirt and reaching into his trousers. They are then interrupted by Borat who runs in and says: “She’s 15. She’s too old for you.”

Representatives for Giuliani have not replied to the Guardian’s requests for comment.

Word of the incident first emerged on 7 July, when Giuliani called New York police to report the intrusion of an unusually-dressed man.

“This guy comes running in, wearing a crazy, what I would say was a pink transgender outfit,” Giuliani told the New York Post. “It was a pink bikini, with lace, underneath a translucent mesh top, it looked absurd. He had the beard, bare legs, and wasn’t what I would call distractingly attractive.

“This person comes in yelling and screaming, and I thought this must be a scam or a shakedown, so I reported it to the police. He then ran away,” Giuliani said. The police found no crime had been committed.

Giuliani continued: “I only later realised it must have been Sacha Baron Cohen. I thought about all the people he previously fooled and I felt good about myself because he didn’t get me.”

Viewers may be less convinced that Baron Cohen, reprising his role as the bumbling reporter Borat Sagdiyev, and Maria Bakalova, who plays his daughter, Tutar, had no success.