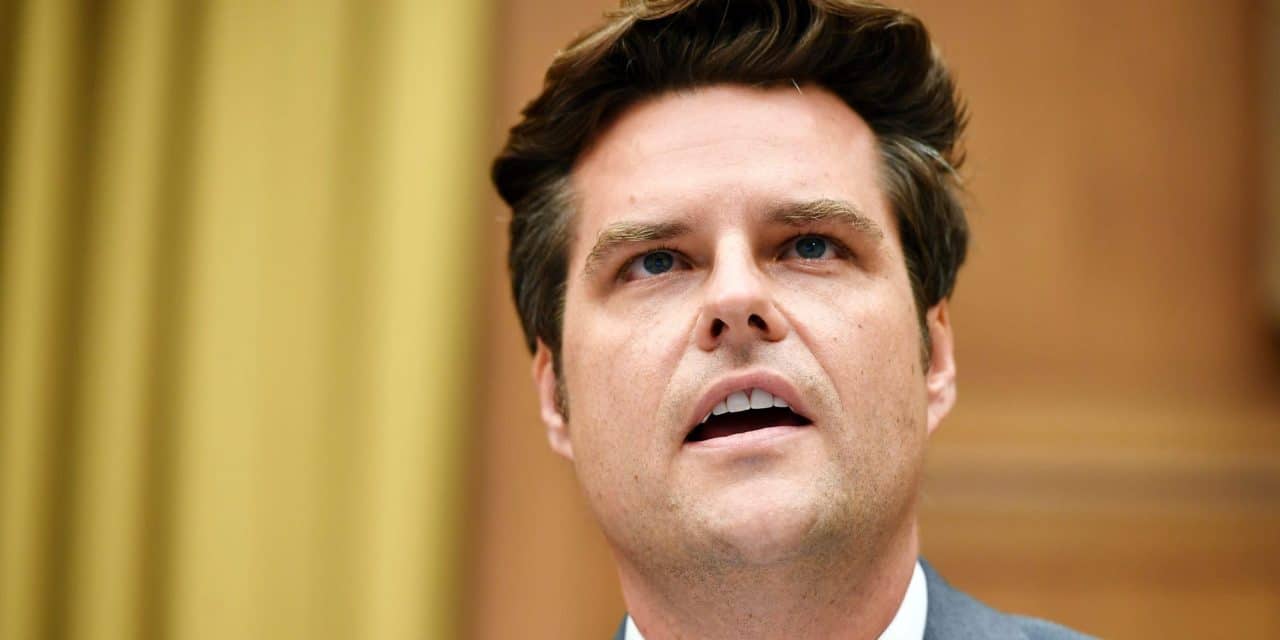 The Justice Department is investigating whether Republican Rep. Matt Gaetz of Florida had a sexual relationship with a 17-year-old girl and violated federal laws against sex trafficking in the process, The New York Times reported Tuesday.

Gaetz confirmed the existence of the investigation to Axios, saying, “The allegations against me are as searing as they are false. I believe that there are people at the Department of Justice who are trying to criminalize my sexual conduct, you know, when I was a single guy.”

The inquiry is part of a larger investigation into Joel Greenberg, a tax collector in Florida associated with Gaetz who was charged last year with 14 felony counts related to allegations that he stalked a political opponent, used a state database to create fake IDs, and sex trafficked a minor between the ages of 14 and 17.

According to The Times, the department launched its investigation into Gaetz near the end of President Donald Trump’s term, when William Barr was still the attorney general. Senior Justice Department officials, including some Trump appointees, were briefed on the investigation, given its high-profile nature, the report said.

Gaetz’s encounters with the 17-year-old girl reportedly took place in 2019, and investigators are said to be zeroing in on whether he paid for her to travel with him across state lines, which would breach federal sex-trafficking laws.

The Florida congressman told Axios and The Times that his lawyers were informed that he was the subject, not the target, of “an investigation regarding sexual conduct with women.” A subject is someone whose conduct falls within the scope of an investigation, and a target is someone whom investigators may believe they have enough evidence against to charge with a crime.

“I only know that it has to do with women,” Gaetz told The Times. “I have a suspicion that someone is trying to recategorize my generosity to ex-girlfriends as something more untoward.”

He told Axios: “I have definitely, in my single days, provided for women I’ve dated. You know, I’ve paid for flights, for hotel rooms. I’ve been, you know, generous as a partner. I think someone is trying to make that look criminal when it is not.”

Asked whether any of the women he interacted with were minors, Gaetz said he was “absolutely” sure none of them were.

News of the criminal inquiry into Gaetz came hours after Axios reported earlier Tuesday that the Florida congressman was considering not seeking reelection in favor of a job at the far-right media network Newsmax.

Gaetz has been one of the most vocal Republicans on Capitol Hill since he was elected to represent Florida’s 1st Congressional District in 2016.

Among other things, he’s made headlines for going to bat for Trump in congressional-oversight hearings, living with a 19-year-old Cuban immigrant named Nestor whom he calls his son and whose sister he dated, shelling out tens of thousands in taxpayer dollars to entities linked to political allies and friends, and crusading against “cancel culture” and Big Tech.

In December 2017, Gaetz was also the only House lawmaker to vote against a bill that allotted more money to the federal government to fight human trafficking.