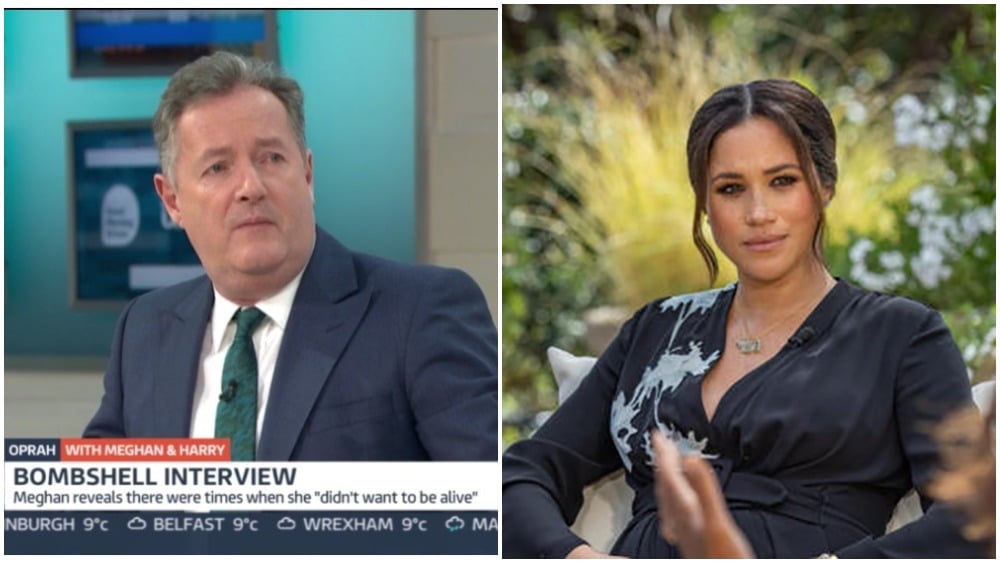 Combative television host Piers Morgan has revealed his take on the controversies swirling around Meghan Markle and Sharon Osbourne.

In a lengthy column in The Mail on Sunday, Morgan reiterated his disbelief of several of Markle’s assertions made during her and Prince Harry’s bombshell interview with Oprah Winfrey earlier this month. He questions their secret wedding in a garden conducted by the Archbishop of Canterbury prior to the official ceremony, and also her claim that her passport was taken away.

“But far more serious was the sensational implication that Archie was barred from being a Prince because of his skin color,” Morgan wrote. “It sounded complete nonsense when she said it, and it is; he’s not a Prince because, technically, the great grandchildren of the Monarch are not bestowed with titles ‘Prince’ or ‘Princess’ unless they’re in the direct line to the throne. This rule applies regardless of the child’s mother’s ethnicity. So, the most serious assertion, one that has already sent racially charged America into a tailspin of outrage, was a falsehood presumably designed to cause maximum harm to the Royals.”

“And for all their guff in the interview about supporting the Queen, it’s the Monarch who decides such titles so they were effectively accusing Harry’s grandmother and Britain’s Head of State of being racist,” Morgan alleges.

Morgan further alleges this was a “disgraceful betrayal,” and also criticizes Prince Harry’s statement about his father cutting off his money and security. “I expected such disingenuous, self-serving wrecking-ball stuff from a social-climbing Hollywood actress like Ms. Markle, but for Harry to publicly shred his family and the Monarchy like this, while Prince Philip was seriously ill in hospital, is so out of character for a man who once bravely served his Queen and country in war,” Morgan wrote. “He can’t be happy doing this, surely?”

Morgan’s outspoken comments about the interview on ITV’s breakfast show “Good Morning Britain” eventually led to his exit from the show and also prompted an investigation from U.K. media regulator Ofcom.

In the column, Morgan reveals that he was asked to apologize or leave the show by ITV managing director of media and entertainment Kevin Lygo. Morgan decided not to apologize and left the show.

Morgan also discusses the repercussions of his friend Sharon Osbourne supporting him on “The Talk,” where she had a heated exchange with co-host Sheryl Underwood. Osbourne has since exited the show.

“It’s outrageous, but what’s happened to Sharon and me in the past fortnight isn’t really about Ms. Markle,” Morgan wrote. “She’s just one of many whiny, privileged, hypocritical celebrities who now cynically exploit victimhood to suppress free speech, value their own version of the truth above the actual truth, and seek to cancel anyone that deviates from their woke world view or who dares to challenge the veracity of their inflammatory statements.