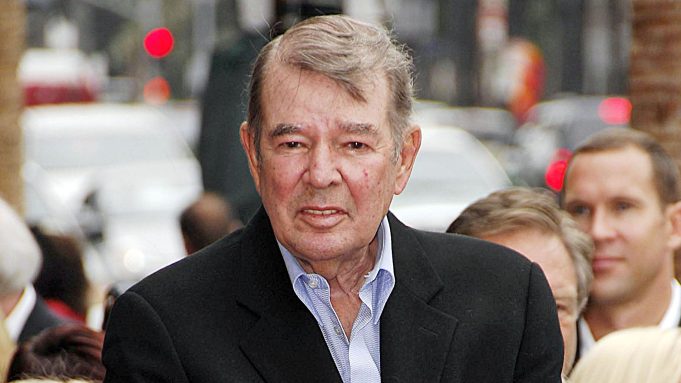 Alan Ladd Jr, the veteran film producer who won a Best Picture Oscar for Braveheart, commissioned George Lucas to write Star Wars and was an influential executive for Fox and MGM/United Artists, died today, his family said. He was 84.

His daughter Amanda Ladd-Jones, who directed the 2017 feature documentary Laddie: The Man Behind the Movies wrote on social media: “With the heaviest of hearts, we announce that on March 2, 2022, Alan Ladd, Jr. died peacefully at home surrounded by his family. Words cannot express how deeply he will be missed. His impact on films and filmmaking will live on in his absence.”

Along with Star Wars and Braveheart, Ladd was responsible for such Hollywood classics as a producer and studio boss, including Alien, Blade Runner, The Omen, All That Jazz, Norma Rae, Chariots of Fire, Thelma & Louise and Young Frankenstein.

“If you gotta work for a studio boss, he was it,” Brooks said in Laddie.

Ladd was born on October 22, 1937, in Los Angeles and grew up in the industry as the son of Shane and The Great Gatsby star Alan Ladd. He began producing films in the early 1970s after getting his start in the business as a motion picture talent agent at Creative Management Associates. His client list included such heavyweights as Judy Garland, Warren Beatty and Robert Redford. Ladd later relocated to London, where he produced nine features in four years.

A man of few words relative to the industry’s chattering norms and with a low-key style, Ladd was in his mid-30s when he returned to Los Angeles in 1973 to serve as Head of Creative Affairs at Twentieth Century Fox. He rose through the ranks quickly and was named studio president in 1976. Soon after joining Fox, he was intrigued by a then-unreleased American Graffiti and sought a meeting with its young director, George Lucas, to see if he has any ideas for another film.

Lucas outlined a character-driven outer-space epic. Despite little precedent for such a movie, Ladd loved the idea and commissioned Lucas to write what would become Star Wars.

“Laddie was one of the few people that actually said, ‘I trust the artist,” Lucas said in the documentary.

During his tenure at Twentieth Century Fox, the studio’s profits went to another galaxy, and its stock rocketed by 1,600%. During the mid-’70s, Ladd would name Ashley Boone as Fox’s President of Marketing — making him the first Black person to be president of a studio division. His sister Cheryl Boone-Isaacs later became the first Black president of the Academy of Motion Picture Arts and Sciences.

Ladd made the cover of Esquire magazine in April 1978, with the headline “Triumph of the Laid-Back Style.”

He left Fox in 1979 to returning to producing and formed The Ladd Company. It was a quick success, scoring a Palme d’Or at Cannes for Akiro Kurosawa’s Kagemusha (1980) and a Best Picture Oscar win for Chariots of Fire (1981). The company followed with such popular and acclaimed films as Blade Runner (1982) — starring Star Wars and American Graffiti‘s Harrison Ford — The Right Stuff (1983), Once Upon a Time in America (1984) and the lucrative if loopy Police Academy movies.