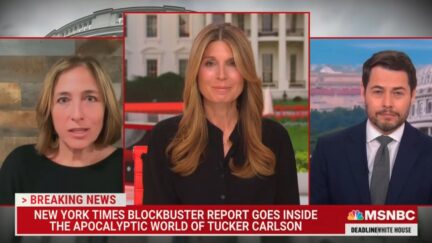 Nicolle Wallace hosted Nicholas Confessore and Karen Yourish of the New York Times to discuss their three-part series on Tucker Carlson that dropped over the weekend.

Confessore wrote the story while Yourish handled the graphics. Both watched countless hours of Tucker Carlson Tonight as part of their deep dive into the popular Fox News host. He stated the network is fashioning its daytime news programming into something more akin to its opinionated primetime lineup.

It was revealing in a way that I can’t even describe. I mean, I had no idea. I had not watched the show before this project, and once I did, I realized that what we wanted to do would create–would be to create an immersive experience so that the people who read the New York Times, who most likely don’t watch the show on a regular basis, could feel what it’s like, because I think it’s easy to dismiss–to dismiss what he is saying as, you know, just another cable TV news host. But he’s way more powerful and the content is way more dangerous than I think what anybody realizes unless you’re watching the show on a daily basis.