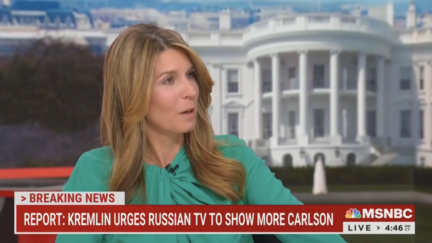 MSNBC’s Nicolle Wallace ripped Fox News for not sending Russian state media a cease and desist letter of its use of clips from Tucker Carlson Tonight.

Tucker Carlson has been against U.S. intervention in Ukraine since before Russian President Vladimir Putin launched the invasion of it last month

The Fox News host has gone as far as to describe Ukraine as an “authoritarian” state that jails political dissidents. Carlson has also lashed out at the White House for sanctioning private Russian citizens and seizing their property.

“How long before they accuse you of collusion or disloyalty, or some other hard-to-define crime, declare you an enemy of the state and then confiscate your bank account?” Carlson asked his audience last Friday.

Russian TV outlets have been airing such clips from Carlson in order to justify the unprovoked war in Ukraine.

On Monday’s Deadline: White House, Wallace demanded to know why Fox News has not demanded it stop.

“So, Bobby, when I worked on campaigns, and I don’t bring up these days how often on this program, but if we used a news clip, the news organization was usually angry and sent out a cease and desist letter,” she said. “I remember in 2004, I think we used a clip or it could have been 2008, of a Tim Russert interview with someone I was working for.”’