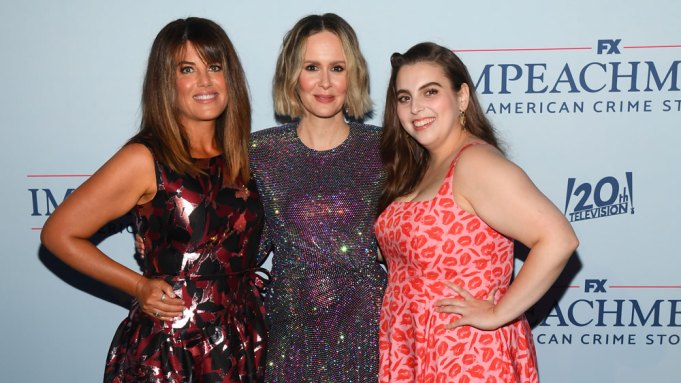 Lewinsky, a producer on the latest installment of Ryan Murphy’s Emmy-winning anthology series, posed for photographers on the red, white and blue arrivals carpet for a few minutes before skipping the interview press to head inside to a makeshift cocktail lounge. Chatter on the carpet was Lewinsky became skittish about being photographed in front of the façade of the White House that was erected on the step-and-repeat or the “Impeachment” posters, which also feature images of the White House.

“Impeachment,” which premieres on Sept. 7 on FX, chronicles Lewinsky’s affair with Pres. Bill Clinton when she was a White House intern in the late 1990s as well as independent counsel Kenneth Starr’s investigation of the president.

Inside the reception area, Lewinsky sat on a couch with friends before mingling with Beanie Feldstein, who portrays her in the 10-episode season. Sarah Paulson, who plays Linda Tripp, introduced Lewinsky to Elizabeth Reaser, who appears in “Impeachment” as a White House staffer who claims Clinton kissed her during an office meeting.