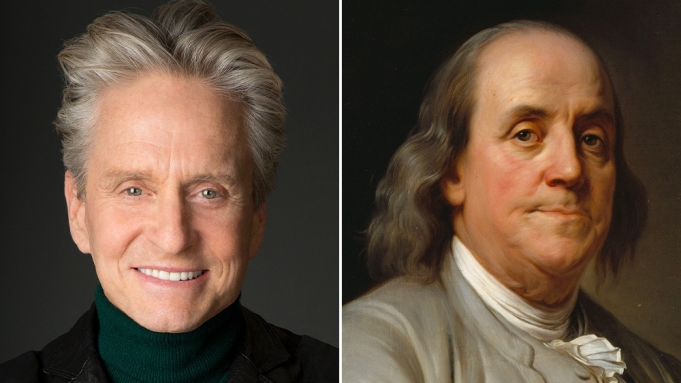 Apple TV+ has officially confirmed a limited event series starring Michael Douglas as Benjamin Franklin. The Oscar winner executive produces the project about the American polymath, from John Adams writer-executive producer Kirk Ellis, TV director, writer and producer Tim Van Patten (Boardwalk Empire, The Sopranos), Tony Krantz and his Flame Ventures and Richard Plepler’s Eden Productions under the company’s deal with Apple Studios. Based on Pulitzer Prize winner Stacy Schiff’s book A Great Improvisation: Franklin, France, and the Birth of America, the series, which has been casting for the past couple of months, is a co-production between ITV Studios America and Apple Studios.

Written by Ellis and directed by Van Patten, the drama will explore the thrilling story of one of the greatest gambles of Benjamin Franklin’s career. At age 70, without any diplomatic training, Franklin convinced France – an absolute monarchy – to underwrite America’s experiment in democracy. By virtue of his fame, charisma, and ingenuity, Franklin outmaneuvered British spies, French informers, and hostile colleagues, all while engineering the Franco-American alliance of 1778 and the final peace with England of l783. The eight-year French mission stands as Franklin’s most vital service to his country, without which America would not have won the Revolution.

Franklin, a drafter and signer of the U.S. Declaration of Independence, was one of the Founding Fathers of the United States, a group of American revolutionary leaders who united the Thirteen Colonies, led the war for independence from Great Britain, and built a frame of government for the new United States of America.

Ellis and Patten will executive produce alongside Douglas, Plepler via Eden Productions, Krantz through Flame Ventures and Mark Mostyn. Stacy Schiff will serve as co-executive producer.

This marks Ellis’ third historic limited series/miniseries featuring Benjamin Franklin, following the HBO miniseries John Adams, in which Franklin was played by Tom Wilkinson, and history’s Sons of Liberty, in which he was played by Dean Norris. On John Adams, he worked with Plepler, who led HBO at the time.

On screen, Franklin also has been portrayed by Orson Welles in the 1954 film Royal Affairs in Versailles and 1961 La Fayette.

Douglas is coming off his Emmy- and SAG Award-nominated starring role as Sandy Kominsky in The Kominsky Method, which aired for three seasons on Netflix. He also recently served as executive producer on Ryan Murphy’s Netflix series Ratched. On the film side, he recently wrapped production on Ant-Man and the Wasp: Quantumania in a reprisal of his Marvel character Hank Pym.