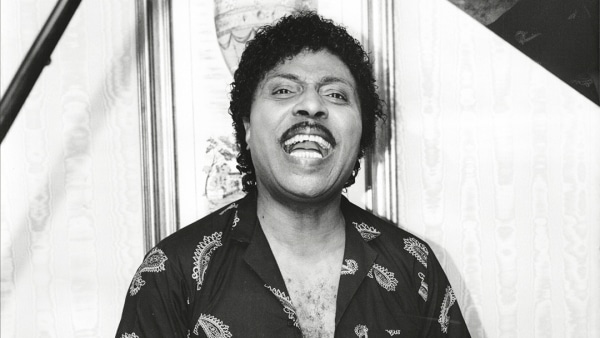 Flamboyant singer-instrumentalist Little Richard, whose high-voltage, keyboard-shattering R&B singles supplied lift-off for the ’50s rock ‘n’ roll revolution, has died. The musician, whose birth name was Richard Penniman, was 87, although some sources say he was older. His death was confirmed by his son, Danny Jones Penniman, who told the New York Times the cause was cancer.

Pompadoured, mustachioed, slathered with pancake makeup and popping his mascara-painted eyes — “Ooh my soul, I’m the prettiest man in rock ‘n’ roll,” he declaimed — and graced with an ego as outsized as his personality and his voice, the daringly androgynous musician established himself as the wildest performer of his musical era.

Writer Nik Cohn captured Richard’s hyperkinetic style in his 1969 history “Rock From the Beginning,” which was fittingly retitled “Awopbopaloobop Alopbamboom” (the nonsensical kickoff line of “Tutti Frutti”) in its 1996 edition.

“He played piano,” Cohn wrote, “and he’d stand knock-kneed at the keyboard, hammering away with two hands as if he wanted to bust the thing apart. At climactic moments, he’d lift one leg and rest it on the keys, banging away with his heel, and his trouser rims would billow like kites.

Richard cut a dynamic figure with frenetic appearances in early big-screen opuses designed to cash in on the rock ‘n’ roll boom. He most famously made a splash in Frank Tashlin’s music-infused 1956 comedy “The Girl Can’t Help It,” which was acknowledged as a galvanizing influence by such future stars as John Lennon of the Beatles and Keith Richards of the Rolling Stones.

An inaugural inductee in the Rock and Roll Hall of Fame in 1986 and a 1993 Grammy Lifetime Achievement Award honoree, he left his mark on notable white rockers who succeeded him. Elvis Presley covered four of Richard’s hits in his breakthrough year of 1956. The Beatles — who shared a stage with him on a 1962 U.K. tour — paid explicit homage to his style in performances like their cover of “Long Tall Sally” and their own homages, usually sung by Paul McCartney, like and “I’m Down.”