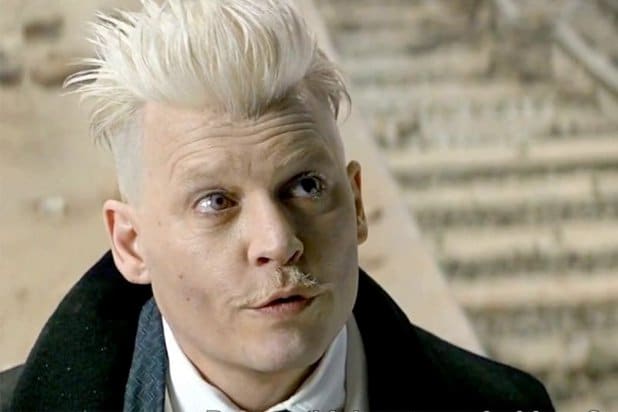 That was appropriate for a character who, in the “Harry Potter” universe, is essentially a magical cross between Hitler and Mussolini. Depp-as-Grindelwald lectured that he doesn’t want to destroy muggles (aka humans), it’s just that he thinks they’re “different” worth than wizards. Notably, he didn’t quite adopt the speech inflections and accent seen onscreen in the “Fantastic Beasts 2” trailer that debuted Saturday — instead he sort of mumbled haltingly, occasionally leaning into drawling Shakespearean intonations.

The surprise appearance was especially unexpected given Depp’s recent personal troubles. A recent Rolling Stone profile presented him as frequently inebriated and bedeviled by financial issues, some of them related to his divorce from Amber Heard, who accused the actor of abuse. Awkwardly, Heard took to the Hall H stage to promote “Aquaman” soon after the “Fantastic Beasts” presentation. But it was unclear whether Depp and Heard’s paths crossed.

The audience at Comic-Con didn’t seem to care about all that. Though there was a social media backlash against Depp’s casting, inside Hall H it was all cheers.

Last year, after Depp and Heard’s divorce, “Fantastic Beasts” creator JK Rowling issued a statement saying: “Based on our understanding of the circumstances, the film-makers and I are not only comfortable sticking with our original casting but genuinely happy to have Johnny playing a major character in the movies.”