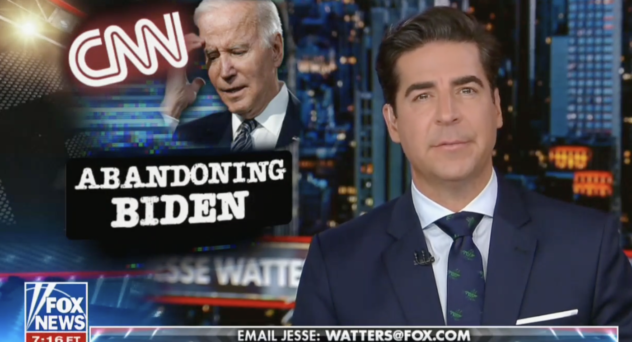 Fox News host Jesse Watters praised CNN for its pivot toward “the middle” as he noted the network’s personalities have been asking tough questions about President Joe Biden.

“Something really strange is happening over at CNN,” the host said Wednesday on his show. “They are turning their backs on Joe Biden. We noticed it on Monday when Don Lemon decided to get tough on Biden’s press secretary.”

“We were just as shocked as the French woman was,” Watters said. “The times, they are a-changing.”

The Fox News host showed another clip of Lemon explaining why he asked Jean-Pierre about Biden’s energy.

“First of all, I’m a journalist,” Lemon explained. “That’s my job is to ask questions, and as the person who represents the administration and the president, it’s her job to answer those questions.”

“He is not the only one seeing the light,” Watters said. “Over the last 24 hours, several faces over at CNN have just turned their backs on Biden.”