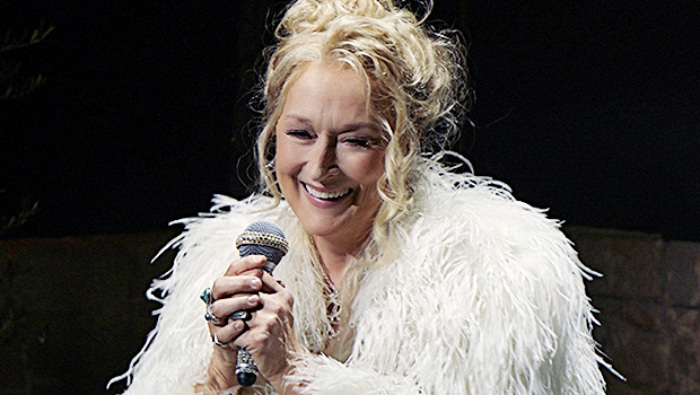 For months, the theories have been running rampant over what happens to Meryl Streep’s character in the sequel to ‘Mamma Mia’. Now, the time has come for the truth: Is she dead?

When the trailer for Mamma Mia! Here We Go Again dropped earlier this year, fans were immediately taken aback by the complete and utter lack of screen time by the divine Meryl Streep. Considering that the sequel focuses on her character Donna Sheridan’s past, it seemed strange that there was no sign of her in the present. It immediately led many to speculate that her character had died, though no one from the film was willing to confirm or deny. But now, we know for sure, having seen the film in a sneak peek before the official opening on July 20th…

Mamma Mia stars Amanda Seyfried and Pierce Brosnan chat about the 10 year gap between the first film and the sequel, and reveal where their characters are in the story. But how was reuniting with the cast and just how much singing did Pierce do this time round?

SPOILER ALERT — yes, she’s gone. I know, sad faces all around — but the worst of it is, we never exactly find out how she died. We find out when — Donna’s daughter’s boyfriend Sky let’s it slip that she’s been gone a year from when the movie picks up — but no one ever explains what took down the most vivacious and charming character in musical history. It’s a truth that the audience struggles with right along with the rest of the characters in the film. Rosie, played by Julie Waters, actually bursts out into tears every time someone even mentions Donna’s name. (Same, Rosie, Same.)

Mamma Mia! Here We Go Again’s release comes 10 years after the first film, which grossed over $600million (£444million) in the box office, and while the original cast are back in force, they will be joined by a host of new arrivals.

The movie, produced again by Judy Craymer and Gary Goetzman, is written and directed by Ol Parker, based on the original story by Richard Curtis, Catherine Johnson, Benny Andersson and Björn Ulvaeus.

The new stars of the franchise include Lily James as a young Donna, played originally by Meryl Streep, while Young Rosie and Young Tanya are played by Alexa Davies and Jessica Keenan Wynn respectively.