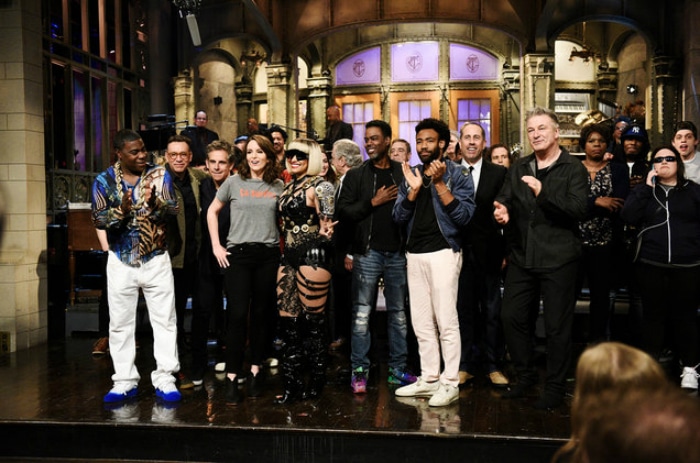 Saturday Night Live has released a video full of bloopers from its latest season, its 43rd, on Tuesday (July 17).

The team stepped up their game this year in terms of production and writing. From Kanye West and A Quiet Place to dolphin whispering, the level of ridiculousness hit a new peak. However, no matter how collected the celebrities, or seasoned the veterans, bloopers are bound to happen, just ask Charles Barkley. To commemorate these glorious moments of slip-ups, SNL has released Creating Saturday Night Live: Film Unit Outtakes

There’s something satisfying about watching Childish Gambino mastermind Donald Glover — who is nominated for an Emmy for his appearance — cracking up like a child while learning about the horrors of Kanye’s slavery comments in the Quiet Place spoof. One of the most memorable shorts, “Papyrus,” featuring Ryan Gosling, is full of awkward bloopers in which the Blade Runner 2049 star just cannot keep a straight face while obsessing over Avatar fonts. Unsurprisingly, NBA legend Barkley makes up much of the reel, blurting out obscenities every time he forgets his lines.

A memorable guest host featured in the blooper reel is Barkley. While filming a number of sketches, the NBA legend is seen becoming frustrated and shouting “fuck” when messing up his lines.

Other stars took their mistakes better than Barkley. Glover, who is nominated for an Emmy for his turn as guest host, appears in the blooper reel for the sketch “A Kanye Place.” While filming the sketch, he breaks out of character to laugh. The same thing happens in another clip for the “Friendos” sketch as Glover, Kennan Thompson and Chris Redd break into a hysterical laughter while filming.

The blooper reel concludes with a behind-the-scenes look at the “Welcome to Hell” sketch, which aired during Ronan’s episode. As Ronan, Cecily Strong, Kate McKinnon, Aidy Bryant and Leslie Jones sing the closing note of the parody song about sexual harassment, the women break out into laughter.

A number of SNL cast member are also featured throughout the blooper reel. In outtakes for “Doctor’s Orders,” Pete Davidson laughs when saying, “Nice.” Another blooper features McKinnon and Bryant in “The Dolphin Who Learned to Speak.” Throughout the sketch, McKinnon questions why a dolphin would say “Despacito” to her. She said, “Which is funny, because we weren’t teaching him Spanish at all.”

Check out the blooper reel: