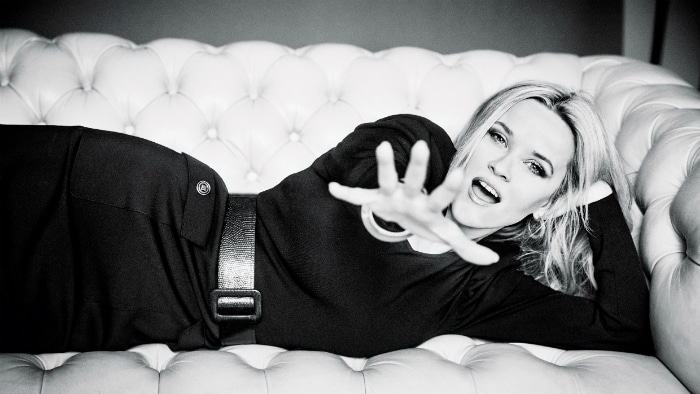 When Reese Witherspoon was 17, she had already appeared in four films. Still, she took an unlikely part-time job, as an intern in Disney’s post-production department. “I wanted to learn about editing, visual correction, and sound mixing,” she tells me 25 years later.

Not long after, she worked as a production assistant on the 1995 Denzel Washington film Devil in a Blue Dress, helping with casting, among other things. Also: “I parked Denzel’s Porsche!”

That inquisitiveness, as well as nearly three decades in front of the camera, has made Witherspoon one of Hollywood’s most astute producers. She turned Gillian Flynn’s Gone Girl into a $369 million worldwide hit in 2014 (that earned Rosamund Pike an Oscar nomination) and did it again, that same year, transforming Cheryl Strayed’s best-selling memoir, Wild, into a breakout success ($52 million plus Oscar nods for Witherspoon and costar Laura Dern). Then came HBO’s Big Little Lies, executive produced with costar Nicole Kidman; the cultural bellwether about female relationships and domestic abuse, based on a novel by Liane Moriarty, swept nearly every category for which it was nominated at the 2017 Emmys. After years of hearing from studio executives that there was no market for female-driven films, Witherspoon had succeeded to a degree that proved a hunger was there.

Her instinct for what women want is now being tested on multiple platforms through her 18-month-old storytelling company, Hello Sunshine. She and her team currently have shows in development at Hulu, NBC, and Apple TV (which has partnered on three projects, one rumored to be the biggest deal in history for a straight-to-series show), as well as a film at TriStar/Sony Pictures. But Witherspoon is also laying the foundation for a direct-to-consumer brand, one that is already beginning to speak to women through a website, social media, YouTube and Facebook videos, audiobooks, podcasts, and newsletters—whichever platform she and Hello Sunshine execs think best honors the story being told.

For all the company’s digital ambition, Hello Sunshine’s Santa Monica, California, headquarters have an old-fashioned feel. The loft-like interior, with exposed wooden beams and pipes, is cheerfully decorated by Crate & Barrel (Witherspoon collaborates with the retailer). Vintage typewriters and hundreds of books make plain the company’s abiding passions: stories and the people who tell them. Sheets of paper with typewritten words to live by, tacked to a wall, gently rustle every time the front door opens. “I hope that you will find some way to break the rules and make a little trouble out there,” reads one, a line from Nora Ephron’s 1996 commencement address at Wellesley College. “And I also hope you will choose to make some of that trouble on behalf of women.” Fluorescent signs at the back of the room illuminate a five-word ethos: optimism, humor, curiosity, honesty, generosity.

The space—which doubles as a set for interviews—is recognizable from videos on the Hello Sunshine website. Witherspoon’s glassed-in office is within shouting distance of her coworkers, who on a late March day sit or stand at a handful of desks or read books in armchairs. Witherspoon is wearing a navy blazer and a blue shirt with white hearts, both from Draper James, the apparel and housewares brand she launched online in 2015 as a “hey y’all!” celebration of her down-home roots. Her look is feminine, but not precious. Or, as her friend Kerry Washington describes it, “genteel Southern badass.”

Witherspoon, in person, bears a distracting similitude to Elle Woods, the character she made famous with 2001’s Legally Blonde. Celeste Ng, whose novel Little Fires Everywhere is being adapted by Hello Sunshine for Hulu, had a similar first reaction: “She’s bubbly and perky and scarily smart. I thought, Oh my god, it’s Elle Woods! But there’s a kinship with [Election‘s] Tracy Flick, too, in that people who underestimate her learn their mistake really fast.”

Wherever Witherspoon goes—Asia, Europe, Africa, South America—she is stopped by Legally Blonde fans: “I went to law school because of you,” they’ll say, or, “You helped me believe in myself.” She gets teary talking about the film’s impact. “I didn’t even understand when I was making it that it was a bit of a modern feminist manifesto,” she says. “Seeing a woman who is interested in feminine attitudes—getting her nails done—but who is also interested in promoting herself and accomplishing things was a new idea of feminine. A lot of women related to that, and the feeling of being underestimated.”