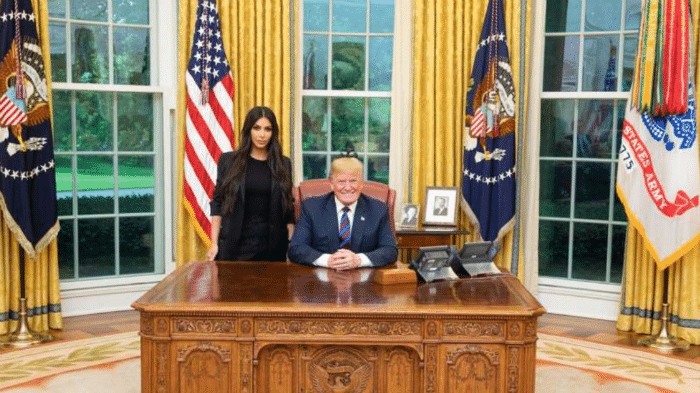 “Great meeting with @KimKardashian today,” Trump tweeted, along with a picture of the two, “talked about prison reform and sentencing.”

The meeting was set up by Trump son-in-law Jared Kushner, who as a top White House adviser has made prison reform one of his major priorities. It came after “months of back-channel talks” between Kushner and Kardashian West, according to Emily Jane Fox at Vanity Fair.

Besides prison reform, the spectacle was also expected to focus on the campaign to pardon Alice Marie Johnson, a nonviolent drug offender who’s currently serving life in prison without parole. Kardashian West has taken up Johnson’s cause in recent months, following a viral video by Mic describing the great-grandmother’s case.

But Kardashian West will have a big task ahead of her: She reportedly wants to ask Trump to grant Johnson clemency.

That would go against Trump’s approach to drugs and crime so far. In response to the opioid epidemic, Trump has said that the government should execute drug dealers and traffickers. More broadly, his administration, under Attorney General Jeff Sessions, has adopted a “tough on crime” view toward drugs.

Kardashian West, though, is reportedly going to try — after she was inspired by Johnson’s story.

Who is Alice Marie Johnson?

Johnson is currently serving a life sentence for a first-time, nonviolent drug offense. Since there’s no parole in the federal system, she’s not eligible for it. Johnson, who was sentenced in 1996, has already been in prison for more than 20 years.

Her case was documented in a video by Mic:

Alice Marie Johnson has been in prison for 21 years for a first-time, nonviolent drug offense. pic.twitter.com/VFe29D2ve8

According to the Associated Press at the time, Johnson helped lead a multimillion-dollar cocaine ring from 1991 to 1994. At her sentencing, US District Judge Julia Gibbons said that Johnson was “the quintessential entrepreneur” in the operation, “and clearly the impact of 2,000 to 3,000 kilograms of cocaine in this community is very significant.” She was tried on cocaine conspiracy and money laundering charges.

Johnson told Mic that she got involved in the drug trade at a particularly bad time in her life. Her son had died in a motorcycle crash, and her marriage had ended in divorce. She also had lost her job, causing financial strain. “I couldn’t find a job fast enough to take care of my family,” she said. “I felt like a failure.”

The damage done by the prison sentence is permanent, Johnson said: “I missed the birth of my grandchildren, being able to be in their life. I just had a great-grandson. I missed that. Both of my parents had passed away. I was not able to be by either of their sides in their final days. That’s an ache that I can’t — that never goes away.”

Kardashian West first heard of Johnson’s case through Mic’s reporting, tweeting in response to the video, “This is so unfair…”

This is so unfair… https://t.co/W3lPINbQuy

According to Mic, Kardashian West then approached her lawyer to help deal with the case and has communicated directly with Johnson. Johnson subsequently wrote an op-ed for CNN earlier this month titled “Why Kim Kardashian thinks I should be released from prison.”

Johnson acknowledges that she did something wrong. The question, for her, is if she should really spend the rest of her life in prison for a nonviolent offense.