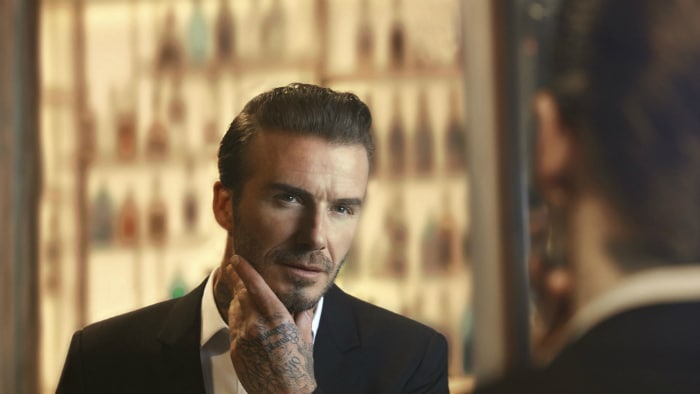 David Beckham is sitting inside an industrial-looking London hair salon. Gazing intently at his own reflection, he works pomade through his long, highlighted hair and applies beard oil to the perfectly-ratioed scruff that frames his chiseled jawline.

“I think it’s important to not take style or fashion too seriously,” Beckham says to the camera, flashing a boyish, knowing grin. “You only really need a couple of good products and a good point of view.”

This is a scene from a promotional video for House 99, a beauty line the 43-year-old former soccer player launched a few months ago with L’Oreal. In the ad, Beckham wears a brown leather bomber jacket that covers most of his tattoos, though the camera makes sure to zoom in on his hands, where there’s inked script of his wife’s name. It also frequently cuts from shots of Beckham to London’s graffitied streets, underscoring his still-edgy appeal, though Beckham’s bad boy persona has softened with age.

As the commercial winds down, Beckham shrugs nonchalantly while he delivers his kicker: “When you take care of yourself, you look good. And when you look good, you feel good.” 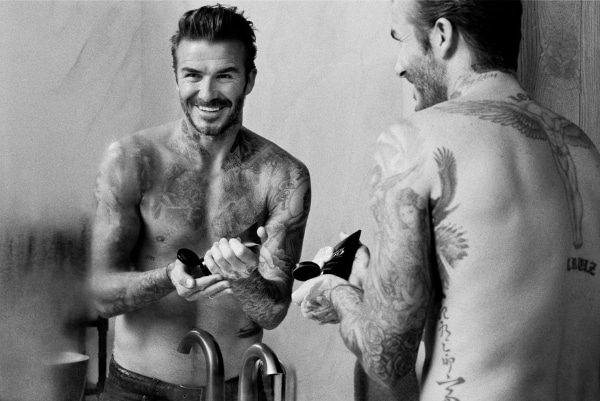 Beckham doesn’t share much about House 99’s products — how they feel or smell, or what he likes about them. He doesn’t have to. The promo nails its agenda: selling Beckham, the man. He radiates confidence with an underlying hum of seduction. L’Oreal knows that his name and face are enough to make the grooming line fly off shelves at Ulta, where its sold in the US, and at stores like Harvey Nichols and Boots in the UK.

“David is one of the most well-groomed men on earth,” says Chenaya Devine Milbourne, a marketing manager at L’Oreal who works on the House 99 brand. “He’s the perfect partner for L’Oreal, having been an icon of grooming since the beginning of his football career.”

It isn’t common for a beauty giant like L’Oreal to tap a male athlete for an advertising campaign, let alone his own line. But Beckham is no ordinary sports star, and the business of Beckham isn’t ordinary either. He may in fact be the world’s most marketable man.

Beckham displayed an interest in style early on

Beckham started his soccer career playing for Manchester United in 1992, winning six English Premier League titles and two Football Association Cups during his 11 years with the team. During this period, he also started a six-year stint as captain of the English national team and made two of his three FIFA World Cup appearances.

At the same time Beckham was becoming one of football’s most admired players and Manchester United was dominating the sport, England also became home to one of the best-selling girl bands of all time. Beckham met Victoria Adams in 1997, the same year the Spice Girls went platinum with their second record, Spice World. Two years later, their son Brooklyn was born and the pair got married. The relationship catapulted Beckham to true A-list — not just sports A-list — status, and he started to dress the part.

Beckham built a new image that wasn’t contingent on sports

Beckham is arguably the first — and perhaps only — person to fully transcend the world of sports and become a full-on celebrity independent of his athletic career.

He is by no means the athlete that’s made the most money from brand partnerships. This year, Forbes named tennis’s Roger Federer the top-earning brand-endorsed athlete, with $65 million in deals. (Cleveland Cavalier Lebron James came in second with $52 million and Portuguese soccer star Cristiano Ronaldo third with $47 million.) Forbes only ranks active athletes, and in the year Beckham retired from soccer, he was considered the fifth most-endorsed athlete, netting $42 million from his brand deals.

The business of Beckham, on the other hand, no longer relies on sports at all. Of course, it once did: While he was still a professional athlete, he had the requisite endorsements from Pepsi, Burger King, Gillette, and Samsung. During this time he also scored a lifetime endorsement deal with Adidas that earned him a reported $160 million.