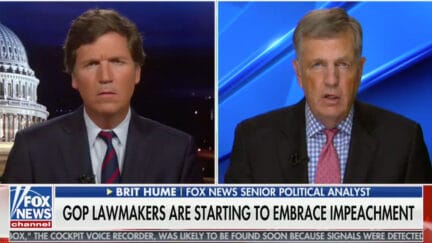 Carlson questioned why Democrats would push to impeach the president now with less than two weeks to go in his term.

Democrats (and as of this posting, three Republicans) are voting to impeach the president over his rhetoric and actions that led to the violent storming of the Capitol by Trump supporters to intimidate lawmakers who were tallying the results of the election. There were even chants of “Hang Mike Pence!” The president had repeatedly attacked Pence and tried to pressure him to save his presidency, something he could not actually do.

So Hume told Carlson the president is politically “radioactive” right now among many Republicans.

And while Trump’s base will stick with him, Hume said most Republicans don’t want him hanging around or even running for president because of the damage he could do.

“They are furious with him,” he continued. “They believe in their bones that he cost them the two special elections in the state of Georgia, which they manifestly should not have lost. Both candidates were ahead and didn’t quite get enough to avoid a runoff and then they lost in the runoff. A lot of Republicans stayed home, offended by Trump. That’s the reasoning anyway. So that’s the reason Republicans are turning away from him. They think he’s bad news politically.”

“I certainly understand why they’re mad at him. A lot of people who voted for him are mad at him for sure,” Carlson said, before again questioning whether impeachment is a good idea.

Hume again threw cold water on Trump’s political future, saying “it would be pretty hard to revive his fortunes politically at this time.”