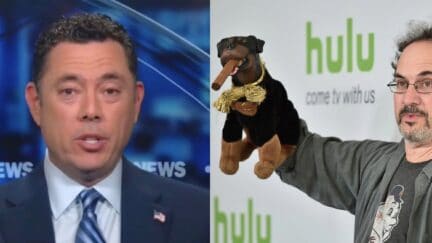 Fox News contributor and former Rep. Jason Chaffetz told Sean Hannity that staffers arrested at the Capitol while working for Stephen Colbert should face the same consequences as people who stormed the Capitol on Jan. 6, 2021.

On Thursday, seven employees of The Late Show were arrested for unlawful entry. One of those detained was Robert Smigel, the longtime voice of cigar-chewing puppet, Triumph the Insult Comic Dog.

The team was at the Capitol last week conducting interviews with Democratic lawmakers for a Late Show segment. After the interviews concluded, the staffers remained in the halls to film additional stand-ups despite reportedly not having permission to do so when the building was closed to visitors. They were arrested by Capitol Police.

Since the arrests were reported, multiple Fox News hosts have drawn parallels between the arrestees in this recent sock puppet incident and those arrested pursuant to the Capitol insurrection, where supporters of Donald Trump violently breached the Capitol in an effort to overthrow the republic.

The House Jan. 6 committee is currently conducting hearings into the riot.

Hannity addressed the Late Show arrests Monday night, asking, “Where’s the outrage from the Democrats? Aren’t they concerned about trespassing and securing the Capitol? Or is that only when they can use it to attack Donald Trump?”

Hannity welcomed Chaffetz and asked for his reaction.