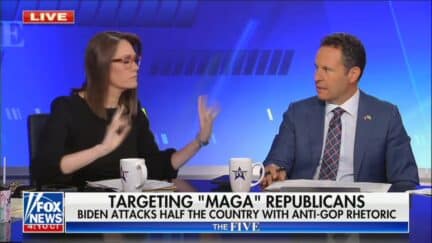 Thursday’s episode of Fox News’s The Five, the top-rated show on cable news, got heated after co-host Jessica Tarlov offered a defense of President Joe Biden’s “semi-fascism” comments and tried to note that former President Donald Trump called for the 2020 election to be overturned this week and he be declared the winner.

After Judge Jeanine Pirro lit into Biden’s remarks saying, “Hate is hate. Hate leads to violence and that leads to retaliation. He’s failed to unify the country and now he’s dividing it even more.”

Tarlov was given the floor to respond and argued that divisive rhetoric is not new to Biden and that perhaps Biden has a point.

Tarlov then spoke about an “insult personally lobbed at me over and over” by Republicans.

“They talk about whether you’re a Democratic socialist or a socialist. If they’re in charge, the country is going to turn to Venezuela. And you look at famed communists and socialists throughout time now, Stalin, Castro, those guys are pretty bad, too,” noting Biden isn’t the only one comparing voters to authoritarians.

“And I get it that fascism, because people think of Hitler, hits a particular note and it does for me as well. And maybe it’s not a good thing to have these names floating around in the ether whatsoever, but it is important to call a spade a spade,” she continued.

“And former President Trump, who, by the way, the reason we’re talking about him is because he won’t stop talking. He won’t get off social…” she continued before being interrupted.

“They raided his house,” jumped in Brian Kilmeade.

“They did not raid his house, they executed a search warrant,” shot back Tarlov before everyone began talking over each other.

Pirro argued it was a raid as the FBI showed up armed.

“Did they show up at 6:30 in the morning and make him stand outside and in his panties? Right. He wasn’t even there when this happened,” Tarlov shot back.

“But Trump called earlier this week for the overturning of the 2020 election and to be declared the, quote, ‘rightful winner,’” Tarlov said, finally making her point.

“We get it1” shot back Gutfeld.

“You get it?” shot back Tarlov adding, “But that’s just to say to me, we get it when everyone else is…” she added as Gutfeld interjected.