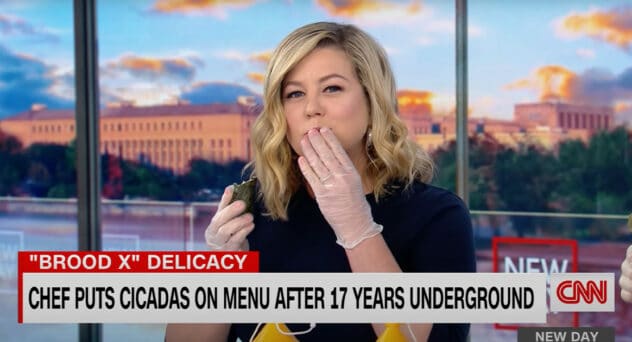 NPR spoke with a chef about the best way to cook and eat cicadas, and one recent CBS News report noted how common insect-eating is around the world.

Brood X cicadas emerged from underground after 17 years, and the phenomenon has impacted the news media too. On Monday, CNN’s Brianna Keilar actually ate a dead cicada on live television.

Chef Bun Lai is serving up cicadas at his family’s restaurant, and he helped walk Keilar through the process of preparing a cicada to eat, while an unbelievably-amused John Berman watched on. They could not stop laughing through the segment, but Keilar ended up saying, “Hey, that’s actually quite delicious.” You can watch that segment above.

Well, the FDA ended up issuing an advisory regarding the eating of cicadas on Wednesday.

“Yep! We have to say it!” the FDA tweeted. “Don’t eat #cicadas if you’re allergic to seafood as these insects share a family relation to shrimp and lobsters.”