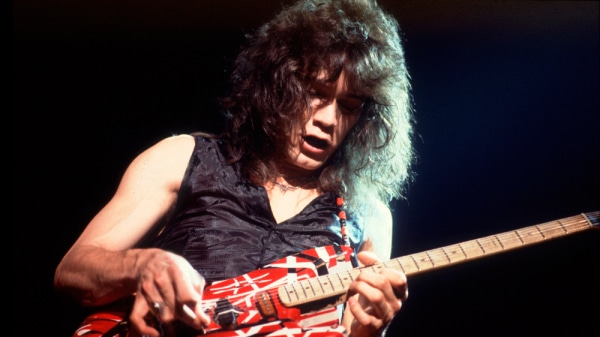 Eddie Van Halen, whose innovative and explosive guitar playing kept the hard rock band that bore his family name cemented to the top of the album charts for two decades, died on Tuesday morning after a long battle with cancer. He was 65.

Van Halen’s son Wolf announced the news. “He was the best father I could ever ask for. Every moment I’ve shared with him on and off stage was a gift. My heart is broken and I don’t think I’ll ever fully recover from this loss,” Wolf Van Halen tweeted.

Born in the Netherlands and raised in Pasadena, Calif., he founded Van Halen with his older brother, drummer Alex; the siblings were joined by vocalist David Lee Roth and bassist Michael Anthony in the first recording lineup of the group, which exploded after star-making gigs at such West Hollywood clubs as Gazzarri’s and the Starwood.

It was instantly apparent from “Eruption,” the solo showcase on Van Halen’s self-titled 1978 debut album for Warner Bros., that Eddie Van Halen was an instrumentalist to be reckoned with. In a mere one minute and 42 seconds, the axe man detonated a dazzling display of fretboard tapping, ringing harmonics, lightning-fast licks and smeared, dive-bombing effects.

Writing about that recording in Rolling Stone’s 2015 poll of the 100 greatest guitarists — in which Van Halen placed eighth, between Duane Allman and Chuck Berry — Mike McCready of Pearl Jam wrote, “It sounded like it came from another planet… [I]t was glorious, like hearing Mozart for the first time.”

Acting as the band’s musical director and co-authoring the band’s tough-riffing songs, which straddled the boundary between hard rock and heavy metal, Eddie Van Halen found immediate success, and formulated a style that would be emulated by hordes of long-haired rockers.

The group’s first LP, “Van Halen,” though it climbed no higher than No. 19 in the U.S., would ultimately be certified for sales of 10 million copies. Its next five multi- platinum albums all reached the top 10; “1984,” released in its titular year, contained the band’s first and only No. 1 single, the synthesizer-driven “Jump,” and sifted another 10 million units.

Ongoing conflict between the guitarist and the antic front man Roth — who reportedly took exception to Van Halen’s extracurricular work, which included jaw-dropping lead guitar chores on Michael Jackson’s ubiquitous 1983 single “Beat It” — led the singer to split with the act after its elaborate and wildly successful 1984 tour.

Such a defection would likely have split a less popular band, but Van Halen found even greater sales after ex-Montrose vocalist Sammy Hagar replaced Roth. Between 1986 and 1995, the group released four consecutive No. 1 albums.

However, Hagar ankled Van Halen after a tiff about the group’s planned greatest hits package. Eddie Van Halen brokered a truce with former singer Roth long enough to complete a pair of new tracks with the vocalist for the 1996 collection, but after another wrangle, a planned reunion with the singer broke down, and Gary Cherone, vocalist for the Boston pop-metal unit Extreme, signed on for a single album, “Van Halen III” (1998), which tallied comparatively meager sales.

Eddie Van Halen was dogged by personal and health issues that would intermittently interfere with his work in music over the course of the next decade. A chronic joint problem, exacerbated by his reckless onstage style, forced him to undergo hip replacement surgery in 1999. The onset of cancer — likely the result of heavy smoking — led to the surgical removal of part of his tongue in 2000.