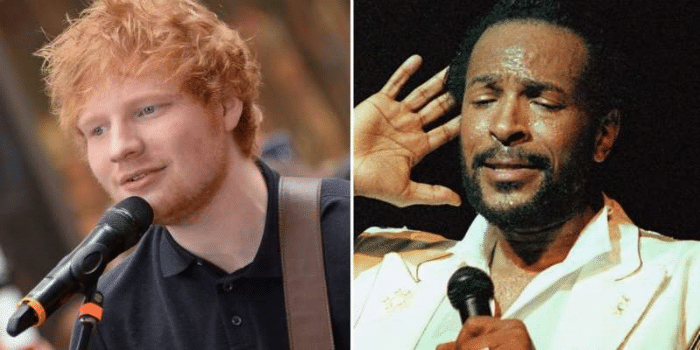 Ed Sheeran is facing a $100 million lawsuit that alleges the singer-songwriter copied Marvin Gaye’s 1973 hit “Let’s Get It On” on his 2014 song “Thinking Out Loud,” TMZ reported.

The company Structured Asset Sales who owns one-third of the copyright to “Let’s Get It On” files the lawsuit.

“According to the lawsuit, Sheeran’s song has the same melody, rhythms, harmonies, drums, bassline, backing chorus, tempo, syncopation and looping as ‘Let’s Get it On,'” TMZ reported.

In 2016, it was reported that Ed Sheeran had been hit with a lawsuitfrom the family of Ed Townsend, the co-writer of Marvin Gaye’s “Let’s Get It On.” The family claimed that Sheeran lifted multiple musical elements—including melody, harmony, and rhythmic components—from the Gaye work for his own song “Thinking Out Loud.” Now, another party has filed a suit against Sheeran for the same copyright infringement, as TMZ reports. Structured Asset Sales, a company that purchased one-third of the copyright to “Let’s Get It On,” is seeking $100 million in damages for infringement.

Sheeran responded to the 2016 suit in documents obtained by TMZ last week. He reportedly claimed that the chord progressions and drum patterns of both songs are “extremely commonplace,” and that similar elements in “Let’s Get It On” are in the public domain and unprotectable.

“Thinking Out Loud” peaked at No. 2 on the Billboard Hot 100 chart in 2014 and has been certified “diamond” by the RIAA for streaming-equivalent sales of over 10 million copies. “Let’s Get It On” topped the Billboard singles chart in 1973 and is certified platinum by the RIAA.

Sheeran’s representatives have not responded to a request for comment from Business Insider on the latest suit.

Listen to “Let’s Get It On” and “Thinking Out Loud” below: