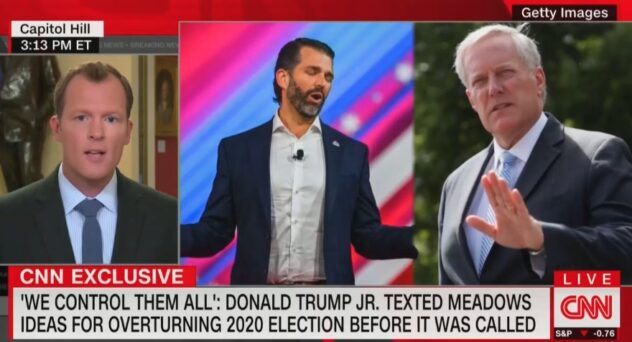 Trump Jr. sent the communication as millions of votes were still being counted across the country.

“It’s very simple,” he texted Meadows on Nov. 5. “We have multiple paths We control them all.”

CNN stated Trump Jr.’s suggestions were “nearly identical what allies of the former president attempted to carry out in the months that followed.” These tactics included litigation, pushing for recounts, and encouraging Republican-controlled state legislatures in states Donald Trump lost to advance slates of electors that would vote for Trump.

The election was days away from being called when Trump Jr. sent the text, indicating a genuine concern that the final vote tallies would be unfavorable for his father.

A lawyer for Trump Jr. named Alan Futerfas told CNN, “After the election, Don received numerous messages from supporters and others. Given the date, this message likely originated from someone else and was forwarded.”

The text is one of many communications obtained by the House Jan. 6 Committee investigating the 2021 Capitol insurrection. On that day, Trump supporters stormed the Capitol and attempted to stop the certification of Joe Biden as president.