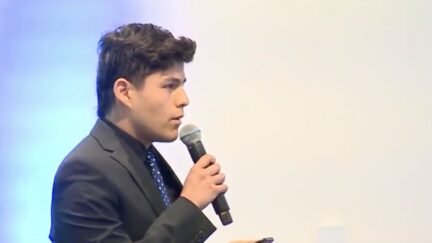 During a Q&A at a University of Chicago summit titled “Disinformation and the Erosion of Democracy,” freshman Christopher Phillips asked Stelter:

You’ve all spoken about Fox News being a purveyor of disinformation. But CNN is right up there with them. They pushed the Russian collusion hoax, they pushed the Jussie Smollett hoax, they smeared [Supreme Court] Justice [Brett] Kavanaugh as a rapist and they also smeared Nick Sandmann as a white supremacist, and, yes, they dismissed the Hunter Biden laptop affair as pure Russian disinformation.

With mainstream corporate journalists becoming little more than apologists and cheerleaders for the regime, is it time to finally declare the cannon of journalistic ethics dead or no longer operative? All the mistakes of the mainstream media, in particular, seem to magically all go in one direction. Are we expected to believe that this is all just some sort of random coincidence or is there something else behind it?

Then, the host of Reliable Sources offered an itinerant answer:

In my honest answer to you, and I’ll come over and talk to you in more detail, is that you’re describing a different channel than the one I watch. But I understand that is a popular right-wing narrative about CNN. I think it’s important, and we’re talking about shared realities and democracy, all these networks, all these news outlets have to defend democracy. And when they screw up, they admit it.

But when Benjamin Hall, the Fox correspondent was wounded in Ukraine, the news crews at CNN and The New York Times stopped what they were doing and they tried to help. They tried to help him get out of the country, they tried to find the dead crew members. That’s what news outlets do. That’s how they actually do work together, to your question about sharing those kinds of connections and trust. We don’t talk enough about it though. We don’t share that reality about how that about how all that happens.

And with regards to the regime, I think you mean the President Biden? The last time I spoke with a Biden aide, we yelled at each other. So that’s the reality of the news business that people don’t see, that people don’t hear. They imagine that it’s a situation that simply is not. But I think your question, it speaks to the failure of journalism to show our work and show the reality of how our profession operates. We have a lot of work to do, I think.

Smollett, the former Empire actor, was convicted last year after staging a fake hate crime against himself by Trump supporters in 2019. The mainstream media — including conservative outlets like Fox News — reported on his claims with little skepticism. That is, before they fell apart. Some outlets, like CNN, were far more credulous than others.

Kavanaugh, during his 2018 nomination to the Supreme Court, was accused of sexual misconduct when he was in high school. He was confirmed to the nation’s highest court regardless, and the mainstream media was criticized with running with some allegations unchallenged.

Sandmann was a high school student caught on video appearing to square up to a Native American man while wearing a MAGA hat. The incident was reported by many outlets, and Sandmann went viral as a villain. It later became clear that the incident was a more complex situation. Sandmann sued a number of outlets, including CNN, with which he eventually reached a settlement.