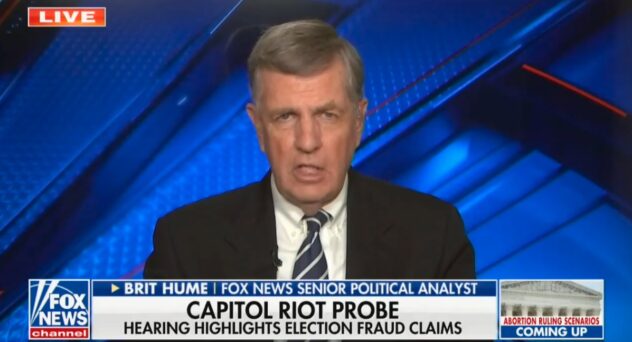 Fox News Senior Political Analyst Brit Hume said many Republicans are silently hoping the Jan. 6 committee damages Donald Trump to the point where he is not a viable presidential nominee in 2024.

The committee, which is investigating the Jan. 6, 2021 Capitol riot, held its second public hearing on Monday and presented testimony from several former Trump advisers. Several witnesses said they informed Trump that his conspiracy theories about the 2020 presidential election being rigged against him were baseless.

The panel also hopes to show to what extent – if any – Trump’s inner circle may have been involved in planning the riot.

On Monday’s Special Report, anchor Bret Baier asked Hume, “I guess the question still is, are they moving towards trying to make a legal case against Donald Trump, or one that is a political case to somehow prevent him from being a factor in 2024?”

“Well, I think they’re doing both,” Hume responded. “Jamie Raskin, one of the committee members has said, you know, part of what they’re doing is to create something that can be referred to the justice department for possible prosecution.”

The Fox News analyst then explained the committee may be doing Republicans a favor by harming Trump’s chances of being the GOP nominee in 2024: