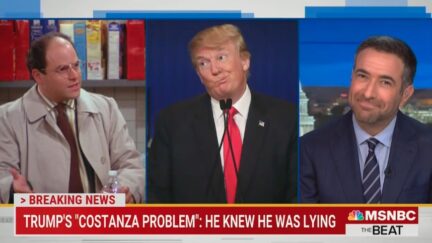 Ari Melber thinks former President Donald Trump is trying to use the “Costanza defense” when he repeats the big lie that the 2020 election was stolen from him.

The MSNBC host referenced a 1995 episode of Seinfeld, where Jerry is scheduled to take a polygraph test after saying he doesn’t watch Melrose Place. Jerry’s love interest at the time – a police officer – doesn’t believe him and invites him to take the polygraph.

He seeks out the advice of George Costanza, who tells him, “It’s not a lie if you believe it.”

Melber said this is the approach Trump has taken when talking about the election.

“Donald Trump always intended to lie about his loss and try to steal the election,” Melber said on Monday. “To cheat after the results came in and to stage a coup.”

He pointed to the Jan. 6 committee hearings and showed several clips of Trump officials and advisers testifying they had informed Trump that his various claims of voter fraud had no factual basis.

“Now, at some point, all this evidence might seem repetitive or even – to some viewers – potentially tedious,” Melber stated. “But the committee’s trying to build potentially a wider criminal case here, so it’s also knocking down potential defenses like that Trump somehow really thought he won or believed some reasonable staff input that claimed he won.”

The host said the testimonies show Trump could not have truly believed the election was rigged against him.