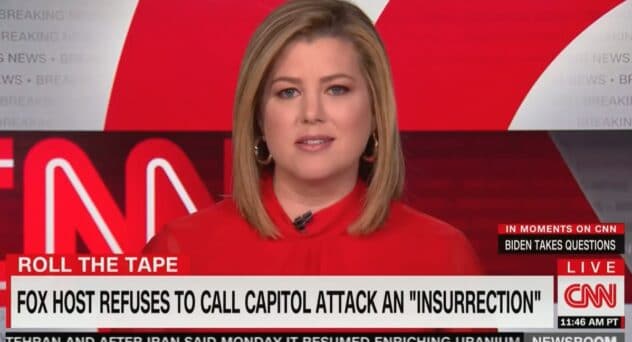 The seven-plus minute rebuttal systematically takes apart every portion of Carlson’s dismissal, in a dispassionate manner that still included the sort of schoolyard taunts and rejoinders that Carlson himself is so fond of making.

Carlson ran footage that mocked Keilar calling the Capitol Building attack by Trump and QAnon supporters an insurrection and mocked the word usage. “The insurrection?” he ridiculed. “It wasn’t an insurrection. It was a political protest that got completely out of control because the president recklessly encouraged it, which is wrong. But it was not an insurrection.”

Keilar played the old “check the Dictionary” gambit and turns out? She’s right. She cited Merriam-Webster’s definition of the word, which reads that insurrection is “the act or instance of revolting against civil authority or an established government.” She added the definition of revolt, which reads “renouncing of ‘allegiance, especially a determined armed uprising” according to also Merriam Webster.

“Since this guy pretends not to understand words,” Keilar snarked, “let’s use pictures.” She then showed damning footage of insurgents breaking windows, carrying zip ties, and generally defacing the nation’s capitol. “The U.S. Attorney’s office said the ingredients for homemade napalm were also found, and pipe bombs were found on the grounds of the capitol and nearby outside the RNC and DNC,” she added. It seemed a solid win for Keilar, but she was just getting started.

Keilar then compared Carlson’s dismissal of the almost entirely white, pro-Trump crowd as a protest that got out of hand, to how he described BLM inspired protests from the summer.

“Antifa, crazed ideologues, grifters, criminals, thugs with no stake in society, nothing better to do,” Carlson said in the clip aired on CNN. “These are not protests. This is not about George Floyd, not about systemic racism, whatever that is. America is not a racist country.”

“Tucker Carlson rolls his eyes at the idea of systemic racism, at while privilege,” Keilar noted, “but perhaps he should roll the eyes over to a mirror. It’s entirely fantastical to think that the crowds of black and brown people would have been treated the way they were on Wednesday. Yes, looting is criminal behavior pun but under the law. What we saw on Tuesday is so much more than that.”