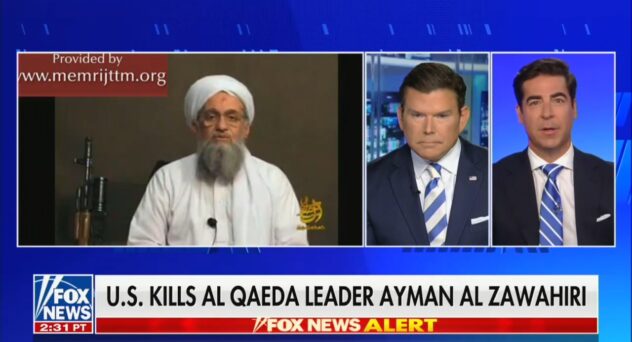 Fox News anchor Bret Baier broke the news during The Five that the U.S. military killed Al Qaeda leader Ayman Al Zawahiri in a drone strike in Afghanistan over the weekend.

“We can confirm from two intelligence sources that al Qaeda leader Ayman al-Zawahiri has been killed by a CIA drone strike in Afghanistan over the weekend. And that is what President Biden will announce from the White House tonight at 730 Eastern Time,” Baier began.

He added that “Zawahiri was a deputy under Osama bin Laden on 911. He is one of the most wanted terrorists, has been for a long time.”

“This is, again, to intelligence sources, saying that this is a big counterterrorism win for the U.S.” Baier continued, noting that Zawahiri took over al Qaeda in June 2011, after the U.S. killed Osama bin Laden.

Baier then took questions from the various co-hosts of The Five.

“This is a huge, huge win for the U.S. and we expect to hear that and where the fight goes from here as far as taking out other terrorists,” Baier explained at one point, adding Biden is certain to offer more details about how the drone strike came to happen.

“So the Biden administration argued after the withdrawal from Afghanistan, which the one-year anniversary is coming up at the end of the month, which we know did not go well, that they would have the capability with the over horizon drone strikes and CIA intelligence to continue to go after terrorism in Afghanistan,” noted Katie Pavlich, adding, “So can you talk about what that means with that backdrop and given this strike that we’re going to hear more about from the president tonight?”

“That’s a great point, Katie,” Baier responded, adding, “This will be, this will back up some of the concerns that critics of the Biden administration had, that they would not have these eyes to be able to follow up on leads on the ground.”

“If everything we’re hearing is accurate and we believe it to be true. They had some active intelligence from people on the ground that we’re working with and that led to this residence and it led to this CIA drone strike so that over-the-horizon strike capability was there, despite the concerns still about where Afghanistan is with the Taliban and without kind of guidance of of US forces, at least in the over the horizon capability,” Baier added.