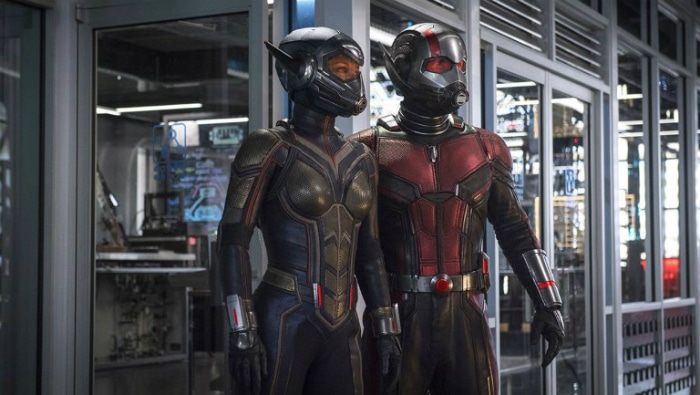 Disney/Marvel’s Ant-Man And The Wasp took flight in 41 offshore markets this session, supersizing to $85M for its international box office bow.

The Paul Rudd/Evangeline Lilly sequel buzzed in about 45% ahead of the first film and landed above industry expectations, despite the lack of some key markets in this early mix.

Overseas, the pesky superhero and his new female partner, The Wasp, buzzed to $85 million for a global start of $161 million. The sequel, laced with plenty of comedy, is pacing 45 percent ahead of Ant-Man internationally. South Korea led with a mighty $20.9 million, including previews.

Heading into the weekend, tracking suggested Ant-Man 2 could come in as high as $85 million domestically, while the lower end of the range was $70 million. The summer tentpole saw a dip of 30 percent from Friday to Saturday, helping to explain the film’s ultimate opening number.

Disney’s Cathleen Taff, who recently took over as President of Theatrical Distribution, Franchise Management and Business & Audience Insight, tells Deadline the Marvel Studios team has “delivered another movie that seems to be resonating.” While Korea is over-performing, overall Taff adds, “The size over the first one is spectacular, but not surprising because Marvel has such affinity in the markets.” Indeed. The weekend’s results lift the MCU’s combined global box office to $17.06B across 20 films.

Ant-Man and the Wasp is the 20th film in the Marvel Cinematic Universe and flew into theaters following the staggering success of fellow Marvel titles Avengers: Infinity War earlier this summer and Black Panther in February. Ant-Man and the Wasp boasts an 87 percent rating on Rotten Tomatoes and earned an A- CinemaScore from audiences. Still, it is a smaller property in the Marvel stable.

The Disney empire currently lays claim to five of the seven biggest openings of the year, while superheroes in general continue their domination at the 2018 box office.

To boot, Disney scored a second victory over the weekend as Incredibles 2 became the top-grossing animated film of all time in North America after passing fellow Pixar pic Finding Dory (2016), not adjusted for inflation. Incredibles 2 finished Sunday with an estimated $503 million, compared to Finding Dory‘s $486.3 million final tally.

Register for FREE. Build an avatar. Take flight with a new friend. Hang out with your BFFs.

As for Disney/Pixar’s Incredibles 2, the 4th offshore session powered up $35.7M in 39 markets putting the family film ahead of Universal’s Jurassic World: Fallen Kingdom for an overseas total of $268.4M and $772.7M worldwide. Kids and families took their eye off the World Cup to kick in a $10.6M start in France — the 2nd best ever debut for Pixar behind Finding Nemo in that market. There are still several majors to come including the UK next weekend.

Jurassic World 2 followed at No. 3 domestically with $28.6 million for a total of $333.3 million. Offshore, the dinos earned another $26.7 million for a foreign tally of $725.3 million and a global haul of $1.058 billion after joining the billion-dollar club last week.

Universal/Blumhouse’s The First Purgecleaned up $10.9M in 26 markets this weekend, including No. 1s in the UK, Germany and Italy. Horror is a good counterprogrammer and this one, from director Gerard McMurray, beat the weather and the soccer to top all previous entries in like-for-likes, including previews.

With the sneaks, it came in over The Purge by 95%, The Purge: Anarchy by 30% and The Purge: Election Year by 16%. Excluding previews it’s the biggest opening of the franchise in 16 markets. Twenty-two are better than the first, 19 are over Anarchy and 17 have more votes than Election Year. The latter film’s top overseas markets were Germany, France and Mexico with a $39.4M final. On this one, there was extended footage screened at the CineEurope exhibitors conference in June. The thrifty $13M fourthquel has a global total of $42M.

Documentaries continued to make headlines at the U.S. box office, where filmmaker Kevin Macdonald’s Whitney Houston doc Whitney opened to $1.2 million from 454 theaters following its world premiere at the Cannes Film Festival. Roadside Attractions and Miramax partnered on the film, which earned an A CinemaScore and appealed heavily to females (65 percent), as well as to African-Americans (72 percent).

Whitney placed No. 12, while Won’t You Be My Neighbor?, which expanded into a total of 893 theaters, earned a stellar $2.6 million for a domestic total of $12.4 million and came in at No. 9. From Focus Features, the film about the late children’s TV personality Fred Rogers passed RBG ($12.3 million) over the weekend to become the top-grossing documentary of the year to date. 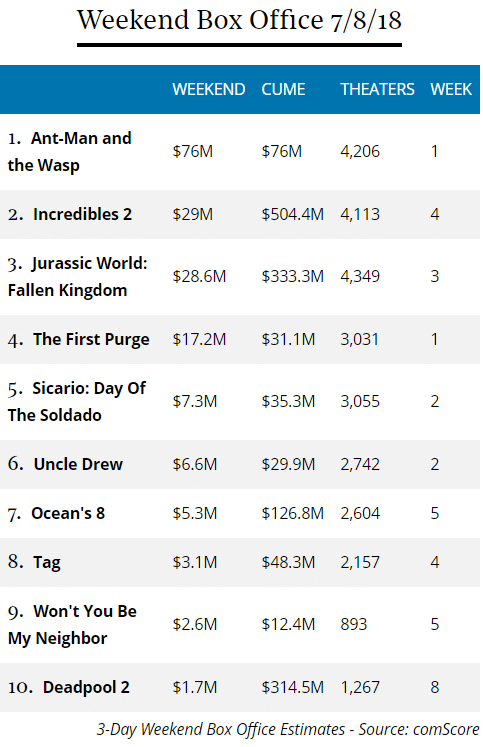 How Hollywood Beat the Heat Amid Record Temperatures