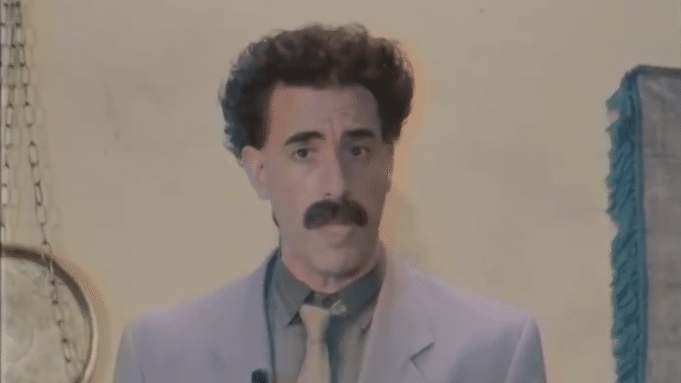 Borat then goes on to explain that the encounter — part of which was secretly shot for the film — is being “turned into something disgusting by fake news media.”

He warns that, if anyone else attempts to besmirch Giuliani, America’s Mayor will “reach into his legal briefs and whip out his subpenis.”

Borat is, of course, the fictional Kazakh alter ego of Sacha Baron Cohen, who is promoting the sequel to his 2006 hit Borat: Cultural Learnings of America for Make Benefit Glorious Nation of Kazakhstan. As first reported by Deadline, that film was acquired by Amazon. The movie became available in the U.S. on Amazon Prime Thursday night.

The scene in question features Giuliani in an interview with Borat’s young daughter Tutur (played by actress Maria Bakalova), who is posing as a reporter. After they chat for a bit, she invites Giuliani for a drink in her hotel bedroom. As he sits down on the bed, Giuliani says, “You can give me your phone number and your address,” while patting Tutur on the back. She then tries removing his microphone before he leans back flat on the bed and appears to be putting his hand down his pants.