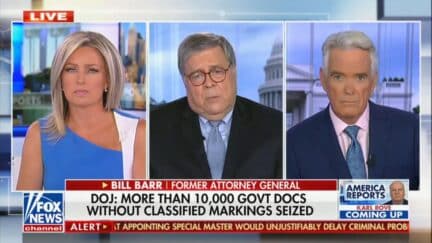 Former Trump Attorney General Bill Barr on Friday smacked down various defenses of former President Donald Trump when it comes to the FBI’s execution of a search warrant at his Florida estate.

During an appearance on Fox News’s America Reports, Barr argued that Trump taking “classified material” with him to a “country club” was just as unprecedented as the federal government raiding a former president’s home – swatting down the notion that the raid was an unwarranted political move.

Barr also took issue with Trump’s defense that he already declassified the documents, arguing that doing so would be “an abuse” that “shows such recklessness that it’s almost worse than taking the documents.”

The interview kicked off with anchor Sandra Smith asking Barr about Trump’s request for an independent review of the documents.

“Well, I think the whole idea of a special master is a bit of a red herring,” Barr replied. “The only documents that have been taken, it seems to me, that there’s a legitimate concern about keeping away from the government and insulating the government from, would be documents relating to his private lawyer communications, him as an individual and as outside lawyers. If there’s stuff like that, fine. Identify it. There doesn’t appear to be much of it. I’m not sure you need a special master to identify it.”

“Is there any legitimate reason for those materials to be in the president, former president’s possession?” asked anchor John Roberts.

“No, I can’t think of a legitimate reason why they should have been could be taken out of the government, away from the government if they’re classified,” Barr responded.

“I frankly am skeptical of this claim that ‘I declassified everything,’ you know, because, frankly, I think it’s highly improbable. And second, if, in fact, he sort of stood over scores of boxes, not really knowing what was in them and said, I hereby declassify everything in here that would be such an abuse and that shows such recklessness that it’s almost worse than taking the documents,” Barr continued, hammering Trump’s defense.

Smith then asked, “Do you think this type of this raid was was avoidable? Do you think a second subpoena, for example, could have been issued?”

“I personally think for them to have taken things to the current point, they probably have pretty good evidence, but that’s speculation,” Barr responded, adding:

And until we see that, it’s hard to say. Now, let me just say, I think the driver on this from the beginning was was, you know, loads of classified information sitting in Mar-a-Lago.

People say this was unprecedented, but it’s also unprecedented for a president to take all this classified information and put him in a country club. And how long is the government going to try to get that back?