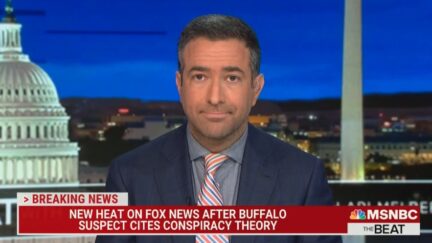 Ari Melber ripped Tucker Carlson on Wednesday night after the Fox News host said he’s “not sure exactly what” great replacement theory is.

On Tuesday, Carlson claimed not to know what the theory holds, despite previously airing multiple segments about it. Melber pointed out the conspiracy theory originated in Europe and says elites there are seeking to import immigrants from the developing world to dilute the political power of White people.

Carlson has echoed this rhetoric in an American context, as did the White suspect in a mass shooting in Buffalo that killed 10 Black people on Saturday. The alleged shooter authored a long and racist screed ranting about this “replacement.” In his writings, the suspect claimed he was radicalized online. There is no evidence he watched Carlson in particular.

Melber played a clip of the Fox News host claiming he doesn’t know what replacement theory is and stated that “he’s lying” because, “He’s proven his knowledge of the theory by citing it knowledgeably, quoting it, and pushing it on air.”

The MSNBC host also took him to task over his reactions to different mass killings. Carlson responded to Saturday’s shooting by blaming the suspect’s alleged mental illness and not any particular ideology.

Melber played a montage of Carlson to killings committed by right-wingers versus left-wingers. The clips show that when a right-wing fanatic kills people – as in the cases of the Buffalo shooting, the Walmart El Paso shooting, and the Charlottesville car attack – the Fox News host tends to portray those incidents as one-off incidents that aren’t driven by a  broader ideology.