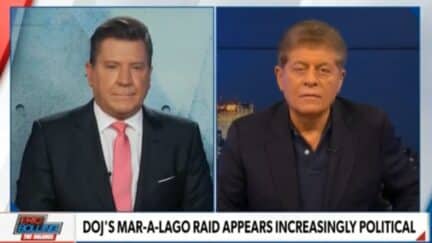 Earlier this month, the FBI executed a search warrant at Trump’s Mar-a-Lago estate in Palm Beach, Florida. Agents retrieved troves of documents from the property, including classified documents that Trump has claimed he declassified before leaving office. The former president was supposed to turn the documents over to the National Archives upon leaving office.

Appearing on Wednesday’s edition of The Balance with Eric Bolling, Napolitano explained he doesn’t see a scenario in which the Department of Justice doesn’t indict Trump.

“You wrote an op-ed saying that you believe there will be an indictment of the former president,” Bolling stated, referring to a column Napolitano wrote for the Washington Times published earlier in the day. “Can you just tell us why you believe that?”

Napolitano said he believes the DOJ raided Trump’s residence because the department anticipates it will indict him.