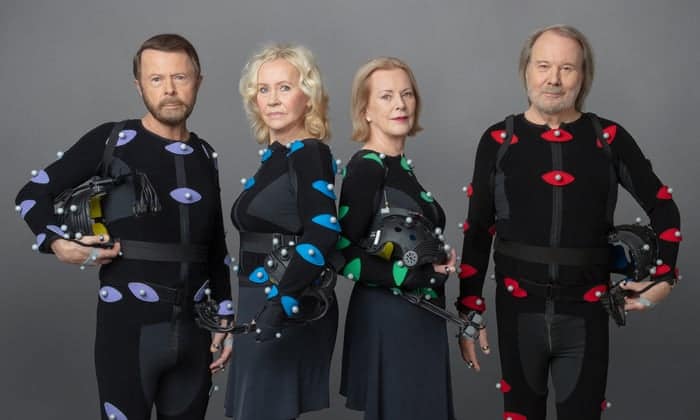 One of the most anticipated comebacks in pop culture has finally come to pass: the return of Abba.

Forty years after the bitter songs written in the wake of two band divorces for their last album, 1981’s The Visitors, the Swedish pop quartet have reunited for Voyage, an album of brand new songs that will be released on 5 November – including, they say, a Christmas song. Two tracks from it, the stately and epic ballad I Still Have Faith in You and the shimmying Don’t Shut Me Down, are out now.

The group – Benny Andersson, Agnetha Fältskog, Anni-Frid Lyngstad and Björn Ulvaeus – have also announced a new concert experience in London, also called Voyage, beginning in May 2022. Digital versions of themselves (not holograms, their team asserted) will appear nightly alongside a 10-piece live band at a new 3,000-capacity venue in the city’s Olympic park, called the Abba Arena. Tickets go on general sale on Tuesday 7 September.

Lyngstad said of their reunion: “Such joy it was to work with the group again – I am so happy with what we have made,” and called Andersson and Ulvaeus “exceptionally talented, truly genius songwriters”.

Ulvaeus said of Fältskog and Lyngstad: “I was completely floored by the way they delivered those songs,” with Andersson saying: “I think hearing Frida and Agnetha singing again is hard to beat.”

Abba’s digital avatars were created using motion capture technology, similar to that used by Andy Serkis and others to portray CGI beasts in Hollywood movies: the group was filmed in skintight suits for the lifelike recreations. Wayne McGregor, resident artist at London’s Royal Ballet, choreographed the band’s performance, and an 850-strong team from George Lucas-founded effects company Industrial Light & Magic designed and animated the de-aged avatars from the footage.

McGregor said: “Imagine: growing up in the north of England in the 70s and learning to ballroom, Latin and disco dance to the incredible songs of Abba. I was eight and I was totally transported. Fast forward to 2020, being in Sweden and dancing with Abba – in real life! I was about to be 50 and I was totally transported again. That is the magic of Abba.” He promised “technological wizardry, state of the art immersion and entertainment innovation. And still at its searing heart we simply have new songs, new moves, classic songs, classic moves.”