The Gallagher household is in flux.

Not that it hasn’t always been ever since we first met the First Family of Showtime, perennially down on their luck and just trying to get by since January 2011. But something happened as the little cable show that could chugged along into its ninth season this fall, riding high on a newfound fandom thanks to its streaming on Netflix. That something? Just the story surrounding the show moving away from the events happening on screen and moving firmly into chatter about the goings on behind-the-scenes.

It began when star Emmy Rossum revealed in August that season nine, which has been split in two and just reached its midseason finale on Sunday, would be her last. But the prospect of losing the show’s star and central character—sorry William H. Macy stans, but you know it’s true!—was only the beginning of a turbulent and life-changing few months for the cast and fans alike. And suddenly a show that’s become an institution for a cable network in need of one has a cloudy future ahead. 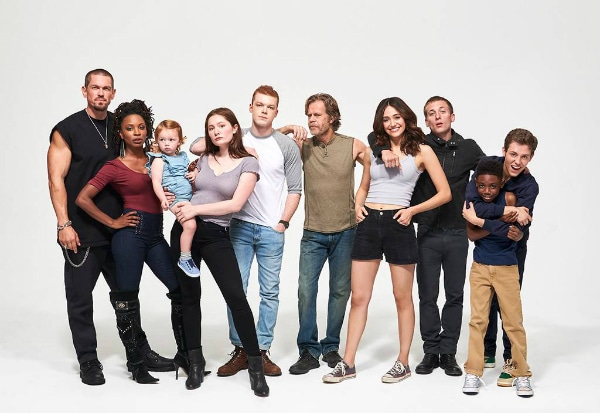 Days before Shameless returned for its ninth season, what should’ve been a celebration about the show’s impending 100th episode (which aired on September 30) became a conversation about how much longer the show might go on when Rossum delivered the news that she was ready to say goodbye to the character of Fiona, the eldest Gallagher daughter and often the lynchpin of the family, if not the series as a whole.

“The opportunity to play Fiona has been a gift. There are few characters — female or otherwise — as layered and dynamic. She is a mother lion, fierce, flawed and sexually liberated. She is injured, vulnerable, but will never give up. She is living in an economic depression, but refuses to be depressed. She is resourceful. She is loyal. She is brave,” she said in a lengthy Facebook post on August 30, announcing her departure. “I know you will continue on without me, for now. There is much more Gallagher story to be told. I will always be rooting for my family. Try not to think of me as gone, just think of me as moving down the block.”

Immediately, fans began to speculate: Why now? After all, Rossum had publicly weathered a contract dispute with the network back in 2016, demanding pay parity with Macy, and came out the other side with a satisfying enough resolution that she returned to work. If that didn’t drive the actress to want to leave, what would now?

The answer to that question would up being understandable, if not a bit banal. It turned out that Rossum was just ready to move on. As a source told E! News, she wasn’t looking to take a break from acting and was merely ready for new roles that would challenge her as an actress. She never expected the show to last as long as it did, nor did she expect to walk away before the series concluded, but once she made her decision, we were told she was leaving with nothing but positive thoughts. And hey, she lasted much longer than the Fiona of the UK series of the same name that Shameless is based on. (For the record, that actress, Anne-Marie Duff, departed after the show’s second season.)

Though Rossum still has seven episodes left as Fiona to air in January when Shameless returns for its second half—assuming her exit doesn’t come before the finale, that is—the wheels have been set in motion for the seminal character’s departure, with her fall from grace bringing her back into the Gallagher home, only for her to realize her family may have outgrown her. And to that we say: How appropriate.

What Happens When Rockstars Let Fans On Stage…

The Likability Factor of Ryan Reynolds

Sandra Oh and Andy Samberg on Hosting the 2019 Golden Globes: ‘We’re Going to Find Our Own Way’