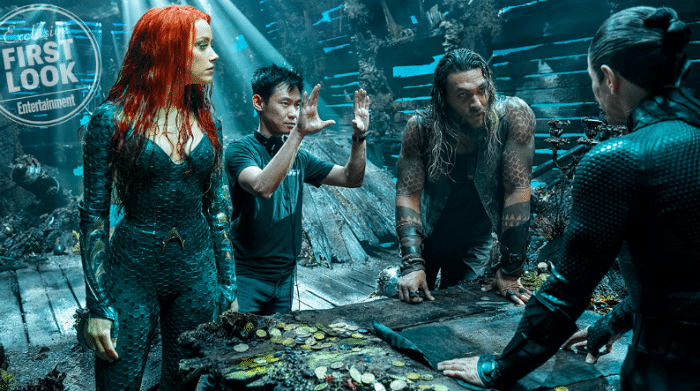 It’s no secret that things have been changing behind the scenes at DC Films.

There have been executive departures, and a shift in the company’s approach to future superhero titles following the release of last fall’s Justice League (which despite racking up $657 million, was the least successful of all the DC Extended Universe titles and was slammed by critics). EW spoke to Warner Bros. film chairman Toby Emmerich, who was elevated to the post in January, about the company’s DC Films division’s next big title, Aquaman, and how it fits into the company’s overall strategy moving forward…

TOBY EMMERICH: That it’s coming out this year. I’m excited to have it in as the last Warner Bros. release in 2018.

Let me ask that a different way: What excites you creatively about the project?
I think it’s hard in superhero movies to go to places you haven’t seen before. You think of how much superhero content there is in theaters and television and [streaming], it’s hard to go to someplace you haven’t been before. Aquaman and the underwater world of it all is fresh and different. James Wan has done an incredible job with his team. It’s taking you to a different place and imagining it in a way you haven’t seen before. For a superhero movie to be in that realm is cool and badass.

What made Wan the right choice to direct?
He’s a franchise maker and builder. I would give him credit for what became known as The Conjuring universe. He initiated the Saw franchise. And he initiated the Insidious franchise. And he built on the Fast and Furious franchise — his film [Furious 7] was the highest grossing one. So when you think of franchise makers and franchise builders there are not many people who have that resume. That alone makes him an inspired choice. And he’s also made many movies as a director and producer for us at Warner Bros. and at New Line. So we know him really well. William Goldman wrote my favorite book on moviemaking, Adventures in the Screen Trade, and he wrote, “make movies with people you like, because it’s really hard, so it’s easier if you really like them.” And we really like James. These movies are monsters. So when you have a director you really like, and who likes you as a company and a culture, it’s a happier experience and, more often than not, a better movie.

What made the Dec 21 date the right time to release it?
I didn’t pick the date. The honest answer is we’re excited about the movie, we want to release it as soon as we can, and that’s the soonest it can be ready for a giant tentpole date. The world is changing — look at Black Panther, that came out in February — so any date can be a tentpole date. But this is the soonest that it can be ready and we’re happy it didn’t miss the year.

For decades Aquaman was this mocked character in pop culture, in places like Entourage and other shows. What’s the most worried thought about Aquamanyou’ll admit to having?
My most worried thought is it won’t be ready in time. I thought it was a clever gag in Entourage. I think it works as a gag. But I know it works as a movie. I know the character and the world is worthy of a movie. One doesn’t undermine the other to me.

Coming off Justice League, how important is it that this movie works?
It’s important. It’s important that it works. I think everybody really worked very hard to make a really good movie. It’s an expensive movie. We believe this movie can work and we’re going to do everything we can as a company — distribution, marketing everything — to make sure it’s successful around the world

There have obviously been changes behind the scenes at the company since Justice League. Is there anything philosophically different now in terms of approaching the creative on DC Films versus a year or two ago?
I want to focus on Aquaman. Aquaman is a bit of a bridge movie yet there is still the connective tissue to the DC movies. But just like how [director Patty Jenkins] brought her own sensibility to Wonder Woman — yet it was very connected [to Justice League] — that movie was very much a Patty Jenkins movie this is very much a James Wan movie.

To read more, pick up the new issue of Entertainment Weekly on stands now, or buy it here; you can also get the cover with Jason Momoa, Amber Heard, and Nicole Kidman online or at Barnes & Noble.