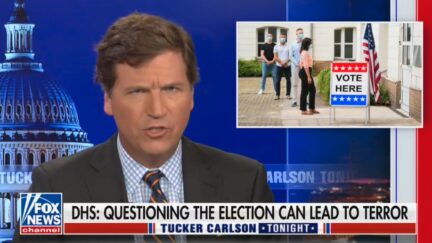 Tucker Carlson revisited the 2020 presidential election on Thursday night and falsely claimed the Biden administration has made it a “crime” to question the results.

In that election, Joe Biden defeated Donald Trump, who has baselessly and incessantly claimed it was rigged against him. There is absolutely no evidence of this, yet he has convinced a majority of Republicans that Biden was elected illegitimately.

“We and you and every other American has an absolute right to seek the truth about elections or any other topic and to say what you think about it, period, Carlson told viewers. “So we’re – it turns out – the only news outlet left in America that believes that. It is now effectively a crime to ask questions about what happened during the last presidential election. That is not an overstatement, by the way.”

He then claimed, “The Department of Homeland Security, which by the way is of course a law enforcement agency – the biggest in the country – believes that asking questions about the last election is a crime.”

Carlson played a clip of an NBC News segment in which a reporter merely said, “Breaking news at this hour from the Department of Homeland Security – that agency warning police departments across the country that false claims about the 2020 presidential election are fueling calls for violence on social media.”

Carlson reacted by bizarrely claiming this was evidence questioning the election has been criminalized.