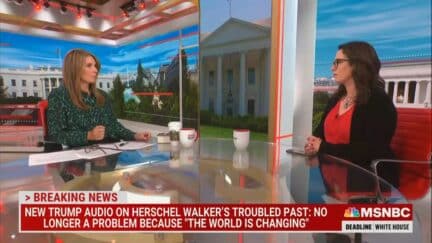 The conversation on MSNBC’s Deadline: White House kicked off on Wednesday with Wallace asking Haberman what is motivating Trump to stand behind embattled Senate candidate Herschel Walker in Georgia.

Does Trump just “want the Hershel Walkers to win to prove this point. Does he want more damaged Republicans in the party?” asked Wallace of the reporter who Trump once said is like his “psychiatrist.”

“He wants to show that nothing matters,” responded Haberman, whose new book Confidence Man came out Tuesday. Haberman added:

“The first page of the prologue opens up with an extraordinary, extraordinarily illuminating anecdote about covering him on questions of race. And I want to ask you, do you think he’s a racist?” Wallace then asked.

“I think he says and does racist things over a very long period of time. I don’t I don’t know how else you would define it,” Haberman replied, adding:

I think that somebody who has been incorporating racial paranoia into his public persona since the 1980s, who took out an ad in related to the Central Park Five case where there were teenagers who were charged in that case, and they were all teenagers of color. And he called for bringing back the death penalty.

And he still won’t apologize, even though for doing that and insists he was right, even though there is proof now that their confessions were coerced by officials. So you go from there through the White House. I you know, he repeatedly says racist things and then says he was taken out of context. But at a certain point, I’m not sure how much benefit of the doubt people are supposed to give.

“Well, in your anecdote and maybe just tell us the story. I mean, when he’s caught, when his racism is revealed, all he wants to know is, in the case of the story you tell. What does he need to say to get out of that news cycle?” Wallace follows up.

“So, this was a moment in the campaign. It was May 5th of 2016 and it was actually the day of the Indiana primary. Now, this was not the first time that David Duke, you know, the notorious anti-Semite, had been celebrating Donald Trump. And he had previously been very slow to disavow David Duke,” Haberman replies, adding: