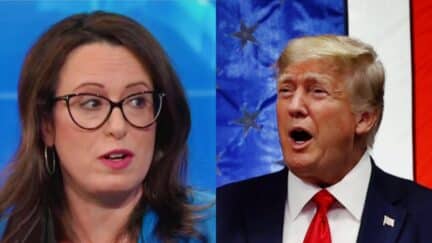 On Monday night’s edition of CNN’s Anderson Cooper 360, anchor John Berman interviewed Haberman on the eve of the release of her controversial but much-buzzed-about book Confidence Man: The Making of Donald Trump and the Breaking of America.

Berman noted that the book addresses Trump’s “casual racism,” and asked Haberman to apply it to the current situation. Haberman took pains to point out that while Trump and his supporters often try to cast his racism as misunderstood or misconstrued, the attack on Ms. Chao was unmistakable

BERMAN: I want to ask you about something that has been in the news the last few days. It’s not in the book, but it is, right? Because of everything that you establish. It is about his comments on Mitch McConnell, and his wife, the former Secretary of Labor, Elaine Chao, which are just racist. Put those into context based on what you’ve seen from Donald Trump from when he was here in New York.

HABERMAN: So there’s a couple things about that comment. One is, there is a racist comment about Mitch McConnell’s wife, it is just objectively racist. Donald Trump has been, you know, engaging in casual racism throughout his life, according to my reporting, all kinds of comments that, you know, were offensive to people who heard them that were about Black people, or were about gay people, or — and so forth and so on. And he often will claim that he was being misunderstood and we have seen that with him, so that allows his supporters to claim something else was going on here. That’s not possible with this McConnell comment or this comment about McConnell’s wife.